David Bobanick is headed to the state capital, driving from Seattle to Olympia, Washington to meet with legislators on both sides of the aisle to talk about “farm to food pantry,” also known as “farm to food bank.” Bobanick is the Executive Director of Harvest Against Hunger, a Washington state non-profit that connects farmers, transportation providers, volunteers and food banks to reduce hunger and food waste in the state.

In recent years, farm to food bank (or food pantry) programs have taken off in states across the country. Proponents echo Bobanick and talk about how these programs are a straightforward win-win: provide healthy food to those in need and support local, in-state farmers. While farmers have long donated to local food banks, state-funded farm to food bank programs go one step further and provide financial incentives to farmers. Food rescue, or reduced food waste, is sometimes included as an additional win. However, this approach can be trickier; while the problem of food waste is immense, some contend that targeting on-farm food loss is misdirected and does not take into account the broader structural challenges, such as labor and transportation costs, that drive such losses. Yet absent structural reforms, most can agree on the value of providing farmers with a financial incentive, whether via direct payment or tax credit, to supply food banks with fresh produce.

"How can we build a food system that values farmers and feeds people?"

Because they seek to simultaneously address a range of issues across the food system, farm to food bank programs enjoy broad support and have led to the creation of new policy alliances. “What was most interesting was the coalition that came together,” says Margaret Brown, Senior Attorney at the Natural Resources Defense Council, when talking about the enactment of New York State’s Farm to Food Bank Tax Credit, which went into effect in 2018. Governor Cuomo vetoed the tax credit in both 2015 and 2016, citing budgetary concerns. However, by the 2017 legislative session, the coalition supporting the tax credit was 150 members-strong and well-organized. Brown observes that the strength of the coalition was in its diversity; environmental and agriculture organizations that sometimes find themselves on opposite sides of an issue came together, joined by anti-hunger, social justice and religious organizations. “These policy alliances have also been instrumental for other work,” says Brown, citing the recent passage of the state’s landmark Food Donation and Food Scraps Recycling Act. 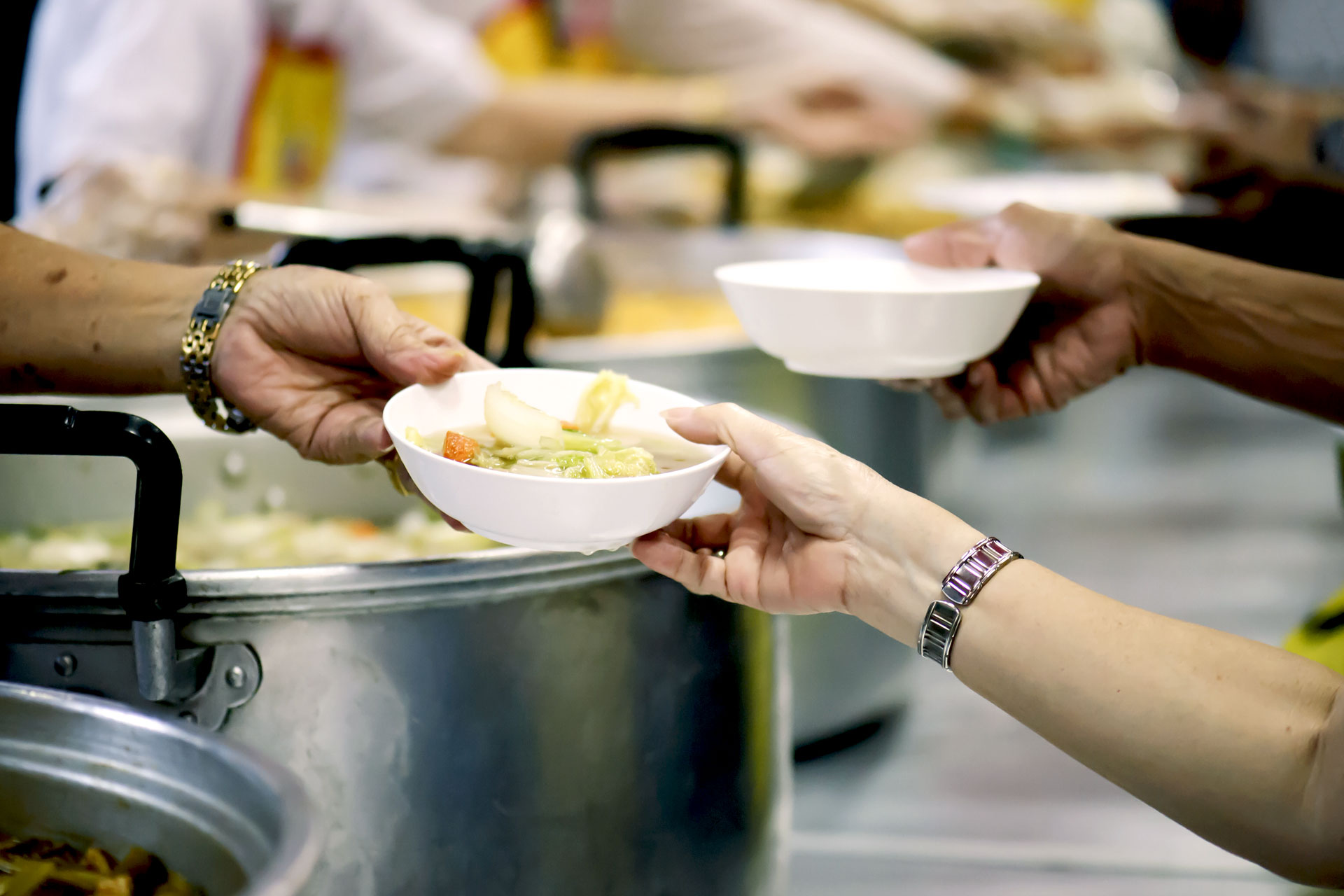 More on Hunger and Food Insecurity

Other Ways Fresh Produce Gets to Food Banks

State-funded farm to food bank programs are just one way that food banks source fresh produce and healthy foods. Many local food banks have longstanding relationships with local farmers who regularly donate, regardless of tax incentives or direct payments. And while farm to food bank programs focus on strengthening relationships with farmers, many food banks regularly receive fruit and vegetable donations from those further down the food chain, particularly retailers and wholesalers.

Then there is The Emergency Food Assistance Program, or “TEFAP,” run by the United States Department of Agriculture. TEFAP distributes American-grown commodities – including fruits, vegetables, grains and meat – to state agencies or food bank networks who, in turn, redistribute these foods to local food banks. The 2018 farm bill included a new ‘Farm to Food Banks Projects’ provision under TEFAP, which commits $4 million/year in federal funding to support state-level efforts. TEFAP has also enjoyed a boon of sorts from the Trump Administration’s $16 billion bailout for producers affected by the trade war with China – the federal government is now purchasing foods from these producers and distributing them through TEFAP networks. But this “trade mitigation food” is only temporary. “I really worry about what happens when it’s gone,” says Steve Linkhart, Director of California’s Farm to Family program. “Unless they plan, food banks will go from feast to famine.

How Farm to Food Bank Works

While the number of state-funded farm to food bank programs has grown, program design varies widely from state to state. This is for good reason: each state has its own climate, geography, agricultural challenges, food security needs, government infrastructure and social services network. What works in one state, may very well not work in another. California, for example, enjoys year-round growing and produces the most food in the country. The California Association of Food Banks Farm to Family program sometimes ships produce to food banks in other states because California’s own food banks are oversaturated and other states’ programs end when the growing season ends. California’s program typically distributes 150 million pounds in-state each year, while Maryland’s distributes 3 million pounds.

Farm to food bank programs are most successful if they can pay farmers — even a modest sum — particularly as many farmers attribute on-farm losses to the fact that they are unable to cover the costs of harvesting, packing and transporting surplus crops. State funding generally allows food banks to cover the “pick and pack out” (PPO) costs of donations from in-state producers, or even match wholesale prices.

Most programs operate on the belief that direct payments, even if they just cover the PPO costs, are critical for building stable relationships with farmers. “Historically, it was an afterthought for growers — I can’t find a home for this, let me donate it,” says Robin Safley, Executive Director of Feeding Florida and its Farmers Feeding Florida program. “But now we have become part of the supply chain, part of inventory management.” Safley stresses the importance of recognizing farmers’ cash flow and seasonal needs. Likewise, Steve Linkhart notes that they pay farmers every week. “I work for the farmer as much as I work for the food bank,” says Linkhart.

Some programs use wholesale or near-market-rate payments specifically to target small and medium-sized farms. Angie Rodgers, President and CEO of the Association of Arizona Food Banks, recently launched Friends of the Farm with $250,000 in state funding. “We already have farmers donating and don’t want to disrupt those relationships, but at the same time we want to bring in smaller growers who want to participate and may even come from food insecure families themselves,” says Rodgers. “How do we get them involved, give back to them and ensure their farms are sustainable?” Harvest for Hunger’s “hyper-localized purchasing model” was also designed with smaller producers in mind. “I call it wholesaling on training wheels,” says David Bobanick. He hopes that the program forges enduring connections between small farmers and their local food banks, while also preparing farmers for other institutional partnerships, such as farm to school.

Money from these state-funded programs also help food banks during lean times. “In 2018, there was a lot of rain and donations were really down that year,” says Amy Cawley, Farm to Food Bank Coordinator for the Maryland Food Bank. “The money from the state was everything.” The Governor provides $750,000 to food banks for local purchasing, about $500,000 goes to Cawley’s program. “If I knew Governor Hogan personally, I’d give him a big hug,” exclaims Cawley. She identifies “Mother Nature” as the biggest challenge and the ability to purchase from local farmers, instead of relying on donations, can provide stability.

Tax deductions and credits offer another state-level policy tool for supporting farm to food bank programs. While the federal government provides two types of tax deductions for food donations, they are narrow in scope. Moreover, farms often do not generate enough income to benefit from deductions, which only reduce a taxpayer’s taxable income. States have therefore stepped in to enact tax incentives that target the needs their growers.

At least nine states now provide tax incentives for food donations and all but Arizona offer a tax credit. Unlike a deduction, a tax credit is a straightforward subtraction from the taxpayer’s tax bill. For example, New York State’s new tax credit gives “eligible farmers” (those who earn most of their income from farming) 25% of the fair market value of their food donation, up to $5,000. A farmer who donates tomatoes worth $1,000 can therefore get a $250 tax credit. The credit is also refundable, meaning that  farmers who don’t have enough income to receive the full credit can receive a check. Ultimately, New York’s law incentivizes farmers to donate up to $20,000 worth of food – it covers fresh fruit, vegetables, eggs, meat and milk grown or produced in the state.

While most states stipulate that donee organizations must distribute food “free of charge,” Virginia’s law permits food donations to non-profit organizations that sell food “to the needy.” This allows growers to support innovative food recovery models, such as those that turn donated items into affordable, wholesome meals. California also goes one step further and offers a tax credit for transportation costs associated with food donation.

Only One Step Towards Strengthening State Food Systems

While advocates tout farm to food bank as a win-win-win, they are also quick to acknowledge that the broader challenges persist. “Ideally, farmers would get paid at a level that works for them,” says Margaret Brown, of the National Resources Defense Council. “And people would be able to afford healthy food and not rely on food banks.” Those coming from the food banking side agree and see farm to food bank programs, which assign at least some economic value to locally-produced foods, as an important first step. “Hunger should not be solved on the back of charity,” asserts Robin Safley. “Especially in Florida, with this abundance, how can we build a food system that values farmers and feeds people?” While state programs look to each other for inspiration and advice, they appear most excited about creating solutions that work for their local communities in order to build more resilient, state-level food systems.