Summer is not summer without corn on the cob, without husking and picking the silk off the ears, without those little yellow plastic corn cob holders. There is a lot of corn grown in this country, but only a fraction of it is the sweet corn we eat at July and August picnics. There are several major types of corn, including:

What to Look for When Buying Corn

Look for ears that are firm, plump and fairly unblemished. Contrary to popular belief, you do not have to strip the ears of their green husk before purchasing them (and in fact, this drives farmers crazy). Just gently squeeze down the length of the ear to feel for bald spots.

In general, US corn production is heavily subsidized, heavily monocropped and heavily dependent upon commercial inputs such as pesticides and fossil fuel-derived fertilizers. In addition, the USDA reports that as of 2018, approximately 90 percent of corn grown in the US is genetically modified. Until recently, there was no sweet corn that was genetically modified, but that has changed in the past few years. Corn is also a primary source of animal feed on factory farms. It is also used to produce ethanol, which has its own serious environmental issues as well as high fructose corn syrup, which has serious negative health issues.

The Environmental Working Group’s Shopper’s Guide to Pesticides in Produce lists corn at number 48 (out of 49 ) on its list of fruits and vegetables with high levels of pesticide residue. Talk to your local farmer about his or her corn production methods to learn more about how your corn was grown.

Find Out When Corn Is in Season

Sweet corn is available only in the summer and early fall, in most areas between July and September. Because sweet corn is at its best when really, really fresh, try to seek out local corn from farmers markets or farm stands.

Corn purists insist that corn should be eaten the day it was picked, or at the very least, by the next day. However, you can successfully keep fresh corn on the cob, wrapped in damp paper towels, for 2–3 days in the refrigerator. The kernels do become starchier and less sweet the longer the ears are stored.

To remove corn kernels from the cob, you can buy yourself a corn zipper, a handy gadget that removes a couple of rows of corn kernels at a time. Zippers are worth investing in if you plan to freeze a lot of corn or make big batches of creamed corn or corn salad. Otherwise, to remove corn kernels from the cob, use this tip culled from Bon Appétit:  holding the cob vertically, stick the thick end of the corncob in the center hole of a Bundt pan. Slice off the kernels using a small, sharp knife – the Bundt pan neatly catches the kernels as you slice.

Corn is amazingly versatile in the kitchen. The ears can be grilled, boiled, steamed or roasted; the kernels can be creamed, made into pancakes, turned into relish, added to salsa and even churned into ice cream. You can even eat fresh kernels raw right off the cob. Cornmeal and its sister masa harina are used to make tortillas, tamales, cornbread, corn dumplings and corn pudding, among many, many other dishes from around the world. Hominy is made from corn kernels soaked in lime and is available dried or canned. Hominy is used to make hominy grits and is an important ingredient in posole, a traditional Mexican stew. 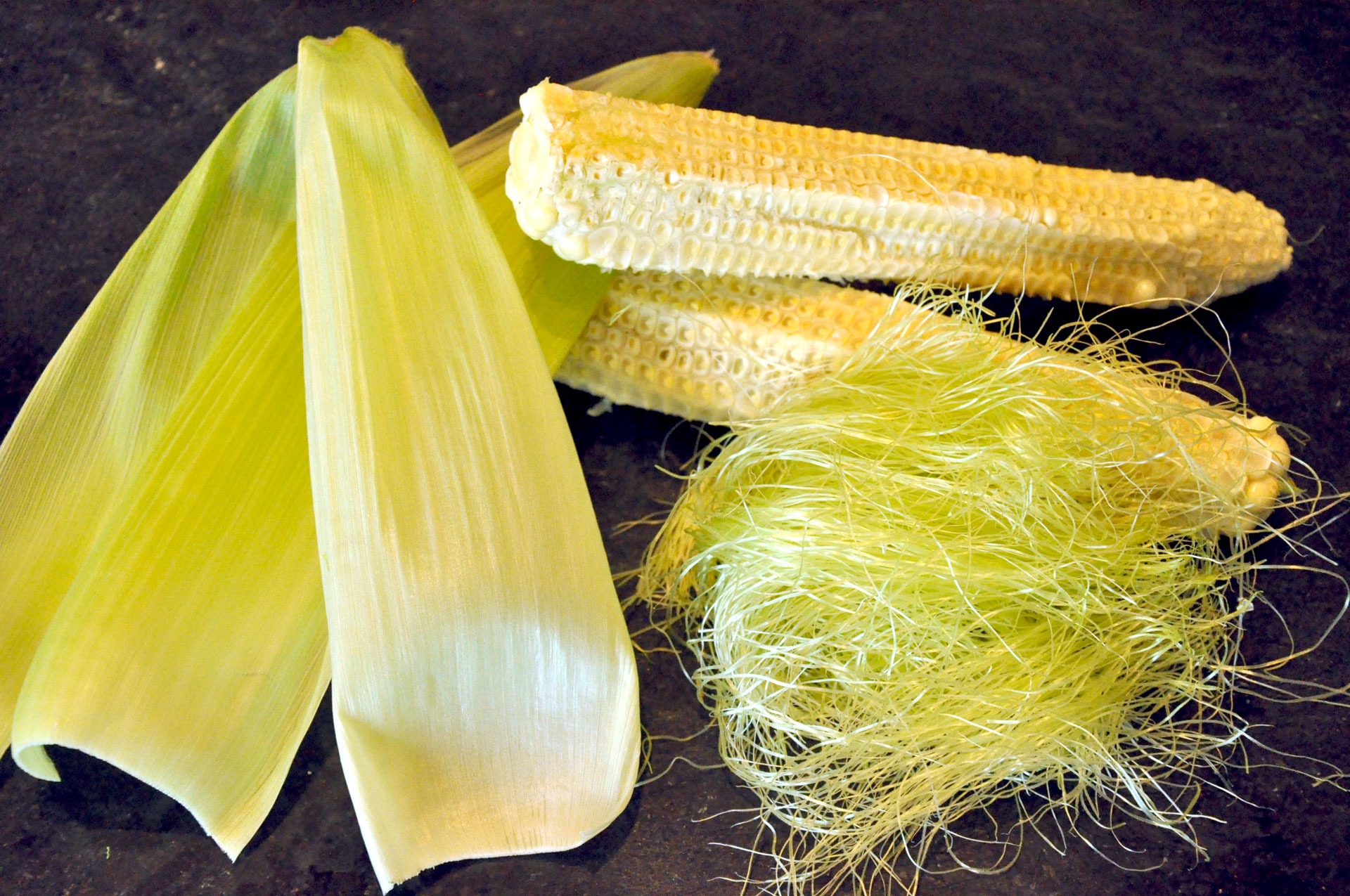 How to Use Your Corn Husks and Cobs

Corn is a natural for freezing. Blanch the corn (easiest to do still on the cob) for 3-4 minutes in boiling water, and then quickly cool in an ice bath (ice plus water). Pat dry. Cut the kernels off the cob, place in freezer bags and freeze. Corn can also be pickled, especially for corn relish.

Fresh corn is a good source of Vitamin B6, thiamin, niacin, magnesium, iron and a number of other important minerals. Corn is also low in fat and high in dietary fiber and protein. Eating corn with beans provides all of the amino acids that humans need, as corn is high in methionine but lacking in lysine, while beans are high in lysine but lacking in methionine.