Both naturally beautiful and symmetrical, eggs have inspired and fascinated artists, scientists, farmers and cooks for millennia. Whether or not we enjoy eating eggs, we humans may like the idea of an egg even more — because it is a universal symbol of life and renewal. Chicken eggs are a staple of so many cuisines and are versatile and nutritious. In this country, we devour them for breakfast, lunch and sometimes dinner and use them in baked goods and more.

Starting at the turn of the 20th century, northern California became ground zero for commercial egg production, beginning with the first commercial hatchery. In 1918, the town of Petaluma opened the country’s first egg ranch, and by 1929 had the country’s largest hatchery. Both the invention of the incubator and the introduction of artificial lighting in chicken coops set the stage for commercial egg production and the beginning of an era of chicken coops, machine-washed, rather than hand-washed, eggs — and ultimately CAFOs (Concentrated Animal Feeding Operations) — factory-farming billions of eggs on a monthly basis.

What to Look for When Buying Eggs

In addition to the yolk and white (aka albumen), the other interior of a chicken egg contains the chalazae, a network of squiggly white strands that help anchor the yolk inside the white. A prominent bunch of chalazae is a sign of freshness. It is perfectly safe to eat. This basic pictorial gives a quick overview of chicken egg anatomy.

Most commercially available chicken eggs weigh from 1.5 to 2.5 ounces, and their sizes are determined by the USDA:

The USDA also grades eggs at the request of an egg producer. The three grades are AA, A and B, based on “the appearance and condition of the egg shell” as well as the quality of the yolk and white. The color of the yolk depends on what the hen eats. If it’s free to roam and eat plants and flowers on pasture, its yolk will be a more intense yellow or even orange. If the hen feeds on corn and soybean meal in confined conditions, the yolk will be lighter in color.

Occasionally, blood spots appear on the yolk. They are the result of a ruptured blood vessel and are harmless. You can remove it with the tip of a knife.

Eggshell color is not an indicator of flavor, nutritive value or quality, but of chicken breed. A hen with white earlobes will lay white eggs, and a hen with red earlobes will lay brown, blue or green eggs. Farmers’ market shoppers may encounter gorgeous blue/green eggs from the Araucana and Ameraucana breeds. 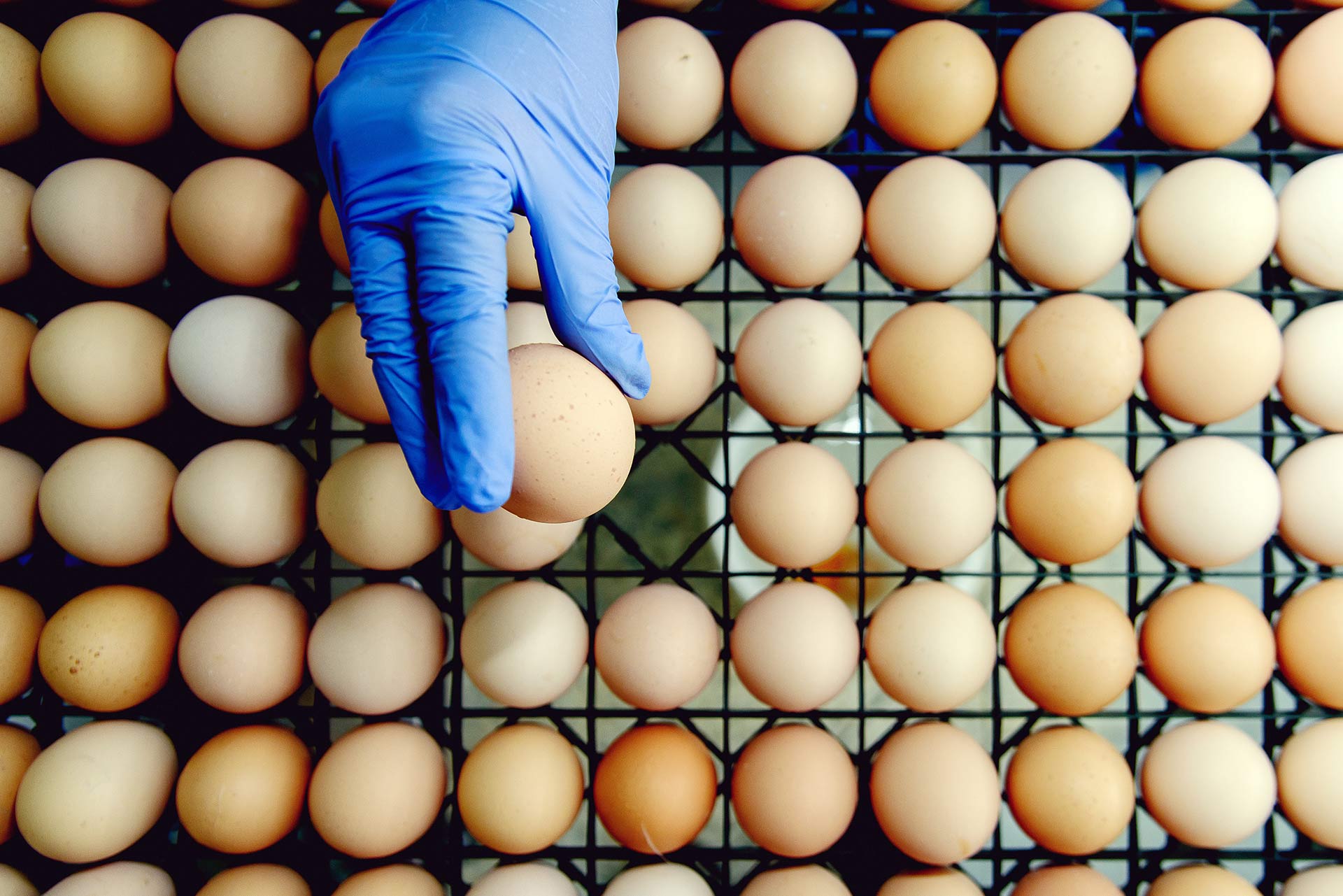 Egg labels are complicated. Several labels appearing on eggs are downright meaningless, because they have no legal definition or are not verified by a third-party inspector. These include “natural,” “humane” and even “pasture-raised.” “Hormone-free” is misleading, as chickens are raised without growth hormones in the first place.

When it comes to cage-free eggs, you should understand that the “cage-free” barns are often hardly better for hens than battery cages; there also is no difference between the two systems in terms of their respective environmental impact.

Whenever possible, buy eggs from an individual who can speak directly to the diet and living conditions of the hens, whether they have access to the outdoors, the size of the flock and how the hens are cared for. At the store, look for eggs that have been independently certified; we’re fans of:

If you’d like to take egg matters into your own hands, you may want to consider backyard chicken farming, a practice that is experiencing a revival in cities and suburbs around the country. Start by researching the local chicken-farming ordinances where you live. Online communities such as Backyard Chickens include everything you need to know, from building a coop to raising chicks.

The FoodPrint of Eggs

For a deep dive on egg production and its sustainability issues, please read our report, The FoodPrint of Eggs.

In 2010, factory farmed eggs were at the center of a multi-state salmonella outbreak that resulted in a nationwide recall of more than half a billion eggs, which the FDA characterized as one of the largest recalls in recent history. According to the Centers for Disease Control and Prevention (CDC), approximately 1,939 people became sick from salmonella associated with the egg outbreak over a seven-month period in 2010. The responsible party was DeCoster Egg Farms, a multi-state operation headquartered in Iowa and the third largest producer in the country at that time. Operating under several brands, DeCoster was among a small group of mega-farms with more than five million “layers.” The outbreak prompted a Congressional hearing as well as criminal and civil lawsuits. In 2011, DeCoster got out of the egg business.

The DeCoster episode is a dramatic illustration of the pitfalls of industrialized agriculture. According to the American Egg Board, 95 percent of all laying hens are under the control of just 247 companies. 59 of those companies oversee flocks of 1 million-plus hens. When we think of CAFOs, we tend to think of cattle or pigs, but these numbers show us that eggs are no different.

For a deep dive on Egg production and its sustainability issues, please read our report, The FoodPrint of Eggs.

Egg-laying hens are extremely light sensitive and are most productive from the vernal equinox to late summer, when there is at least 12 hours of daylight. Farmers’ market shoppers (and backyard chicken farmers) know firsthand that as the days get shorter, egg production slows down, and there are fewer eggs for sale. Eggs are a year-round commodity because hens live indoors under artificial light. But even under these conditions, they still need 10 hours of light a day.

Eggs are extremely porous and readily absorb odors, so keep in cartons rather than those trays built into the door of your refrigerator. Leftover egg whites freeze well (particularly in ice cube trays), but egg yolks don’t do as well in the freezer. Store yolks in a small airtight container and use up within a few days. 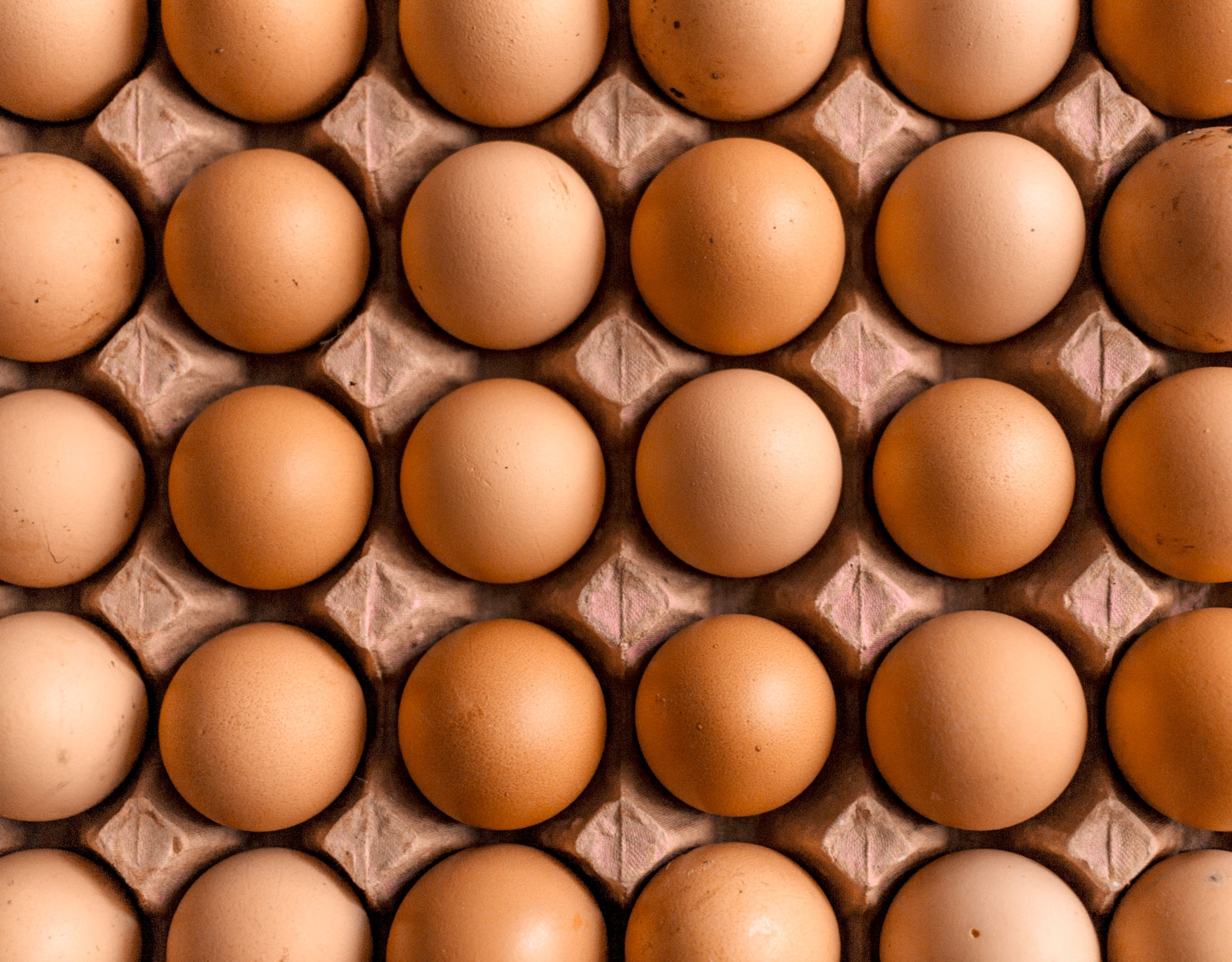 How to Use Leftover Eggs

Let’s get cracking: tap the side of the egg on a hard surface, but not your main mixing bowl or skillet. When adding eggs to a batter, always crack into a smaller bowl, not directly into the mixture, in case of shell breakage or egg defects.

There are enough ways to prepare eggs to arguably keep you entertained for a month. Here’s a sampler of the myriad ways you can have fun with eggs:

And that barely scratches the surface. There are a slew of egg-based emulsified sauces, from mayonnaise to hollandaise. Then there are egg pies (fritattas) and tarts (quiches), and egg-battered goodies, like French toast, egg whites beaten and baked into meringues or egg custards frozen into ice cream.

Nutritional vice or virtue? That’s the question Americans have been asking about the egg over the past four decades. On the one hand, the egg is high in protein, with more than 6 grams in a large egg — at just 72 calories. On the other hand, the egg is undisputedly high in cholesterol — about 215 milligrams — about three-fourths of the daily maximum recommended by the American Heart Association (AHA). Concerned about dietary cholesterol’s link to higher risk of heart disease, the medical community went on the egg offensive in the 1970s and 1980s. The American Heart Association issued guidelines in 1972 recommending a maximum of three eggs per week. (Ironically, it was the same year that the high-fat/low-carb “Dr. Atkins’ Diet Revolution” was first published). But two major studies published in 1999 were instrumental in changing public perception about eggs.

Harvard researchers found that moderate egg consumption — up to 1 egg per day — did not increase the risk of heart disease among healthy people and because of its vast reserve of many other nutrients, could be part of a healthy diet. In 2000, the AHA, citing the Harvard studies, relaxed its recommendations for dietary cholesterol and cautiously permitted “periodic consumption of eggs and shellfish.”

As for its other nutritional benefits, the egg, particularly the yolk, is rich in Vitamins A and D. It is also an excellent source of choline, a little-known B vitamin that supports the nervous system, the brain and liver detoxification, to name a few. In fact, the egg serves up all the B vitamins:  B-1, B-2, B-3, B-5, B-6, B-12, biotin and folic acid. It’s well endowed with several minerals, including manganese, selenium and iodine. The one thing it’s lacking? Fiber.

But are all eggs equally nutritious? Read more about egg nutrition in our deep dive egg report, The FoodPrint of Eggs.