Why are some pepper varieties sweet, while others can literally cause physical damage to the eater? Why does the burn of certain chiles linger, hovering on the tongue like a smoldering fire, while other varieties deliver a sizzling one-two punch and then depart?

Probably indigenous to western South America, the chile pepper eventually made its way to Mexico, where evidence of its cultivation dates from at least 3500 BCE. Columbus was likely responsible for bringing the pepper to Europe. The Spanish and the Portuguese then spread the fruit to formerly chile-deprived areas (like India and Southeast Asia) in the early 16th century.

In 1912, Wilbur Scoville developed what would become the Scoville scale, a measure of chile pepper “hotness.” The scale basically measures the amount of capsaicin, a chemical compound found in peppers that stimulates nerve endings, especially in the mucous membranes (read: your mouth). The Scoville scale ranges from 0 (e.g., sweet bell peppers) to 16 billion (e.g., a capsaicin-like toxin found in a Moroccan shrub). Tabasco sauce falls at between 3,500 and 8,000 on the Scoville scale. 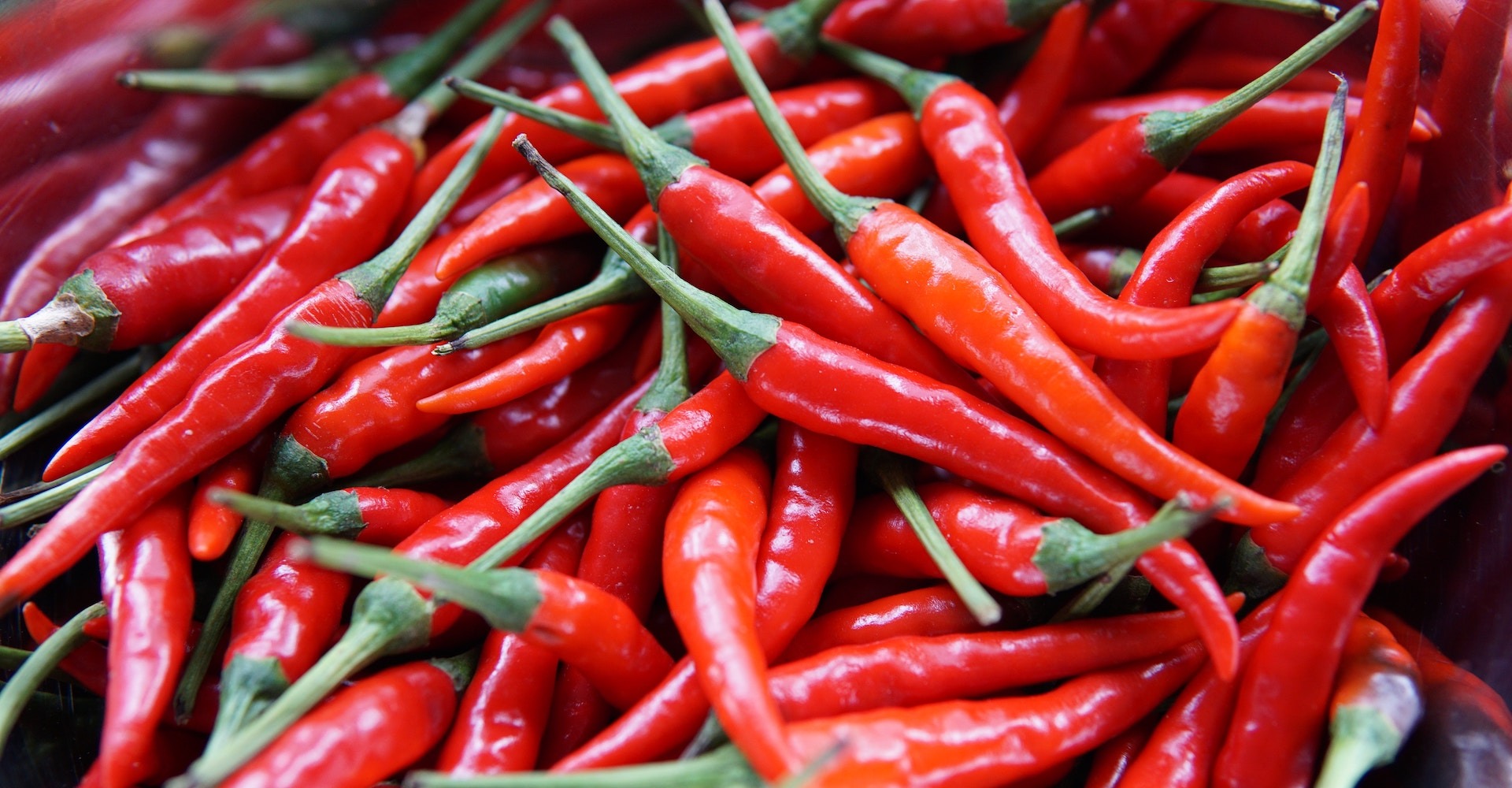 Keep the Heat All Year Round

What to Look for When Buying Peppers

Peppers come in a very wide range of shapes, colors, sizes and heat intensity. The mildest, sweetest peppers are the fruit of the bell pepper plant, which are found in a rainbow of colors, ranging from green to red to purple-black. Chile peppers can be teeny tiny, like the diminutive (and colorfully named) mouse-dropping chile from Southeast Asia to the relatively large Cayenne pepper and also come in many colors, ranging from peach to bright red. All peppers should have very glossy, firm skin with no brown or mushy spots on the surface of the fruit. Dried whole peppers, used frequently in Mexican cooking, should also have glossy skin and should be free of brown or moldy-looking spots.

Pepper growing has, shall we say, issues. The Environmental Working Group’s latest Shopper’s Guide to Pesticides in Produce lists sweet bell peppers and hot peppers on their list of fruits and vegetables with high amounts of pesticide residue. Peppers are also frequently monocropped. If you are concerned about pesticide residue and the environmental problems caused by monocropping, talk to your local pepper grower about his/her growing methods.

Peppers are generally a warm-weather crop, with the season peaking in most parts of the US in August and September. Although the fruit is available year-round, be aware that peppers spotted in the grocery store in winter usually come from far-flung locales.

Find Out When Peppers Are in Season

China leads the world by a mile in pepper production, followed by Mexico, Turkey, Indonesia and the US. In the US, California, Florida and New Mexico are pepper cultivation leaders. Botanically considered a fruit, the pepper is in the Capsicum genus and is a member of the illustrious Solanaceae (nightshade) family that counts tomatoes, eggplant and potatoes as their compatriots. All peppers grown today, including sweet and hot types, are varietals of only five closely related species.

Unwaxed, both sweet and hot peppers can be stored in the refrigerator for up to a week. Make sure the pepper’s skin is totally dry before storing — moisture causes rapid deterioration. Many commercially grown peppers are coated in wax; this extends the storage life of the pepper (sometimes up to three weeks), but isn’t so great if you don’t want to eat wax.

Sweet and hot varieties of peppers are staple vegetables in many diverse cuisines, including Mexican, Indian, South East Asian and Italian. Peppers can be used raw in salads and as toppings for various dishes (think: tacos). They equally lovely roasted, stewed, pureed, stuffed (jalapeño poppers!) and grilled. Peppers also pair well with their tomato, potato and eggplant cousins. Dried chiles, important in Mexican cuisine, have a depth of flavor very different from their fresh versions. (Dried chiles are usually toasted over a flame, and then soaked in water before using in a dish.) Various types of dried peppers are also ground into powder and used as a spice, the most common of which are paprika (usually made from milder chile varieties) and cayenne (usually made from hotter chile varieties).

To diminish the intensity of chiles’ fiery burn in your dish, remove the ribs (aka the “placenta”) and the seeds of the pepper with a very sharp knife before cooking or eating raw. Wear gloves when working with hot peppers to avoid skin burns from the oils found in chiles. Be sure to wash cutting boards and knives that have come into contact with hot peppers with warm, soapy water to avoid a capsaicin-derived kitchen disaster.

How to Quench the Burn?

The capsaicin in hot peppers is actually made up of a number of different chemical components, each with its own special way to burn. That’s why some chiles’ heat is long-lasting, while others go out in a quick-but-memorable blaze of glory. (When we think chiles, we think Bon Jovi.) Some swear that consuming dairy (like a glass of milk) can diminish a chile’s burn; others recommend a spoonful of sugar or something sweet. Rice and ice water are still other common remedies. Whatever you do, do not down a carbonated beverage to relieve the pain — the bubbles enhance the burning. Alcoholic beverages are also ineffective at quenching the fire.

Peppers are easily preserved by freezing and, unlike most other vegetables, do not have to be blanched beforehand. Seed and de-rib the pepper, slice or dice it, and then place it on a cookie sheet in the freezer. When frozen, transfer to freezer-safe bags. Be aware that frozen peppers will lose their crisp texture, which is just fine for recipes that call for cooked peppers. Roasted red peppers freeze beautifully, too. Certain varieties of pepper, like cayenne and the Basque Espelette pepper, are easy to dry: I usually hang them by their stem in bunches in a cool, dry place until they are completely dry, then grind in a spice grinder to make my own chile flakes. Peppers also pickle something fierce.

In general, peppers are very high in Vitamins C and A and are good sources of folate, Vitamin B6, Vitamin E and fiber. Sweet peppers (like bell peppers) are far more nutritious when ripe (i.e., when allowed to turn from green to red, yellow or orange). (Green bell peppers are commercially popular because they are easier to transport and store, primarily because they are unripe.) Colorful peppers are also high in lycopene, a powerful antioxidant that may help diminish the risk of certain cancers.

The chemical compound capsaicin, found in most chile peppers (even the most mild of chiles), has a bunch of positive effects on the body. There is some speculation that chiles cause a mild euphoria due to the endorphins released from the pain of the chile’s burn, which may be why chile-eaters come back for more. Capsaicin also seems to increase the body’s metabolism, helping us store less fat and burn more energy.