When it comes to seafood, it’s clear that people in America prefer shrimp. The average person in the United States eats four pounds of shrimp a year, far above salmon which comes in second place at the 2-pound-mark. The shrimp industry is huge and has a myriad of issues — including human rights abuses and slavery — which means it’s very important to buy shrimp from a source you can trust. For some consumers, without access to responsibly-raised shrimp, it might make sense to cut way back or avoid shrimp entirely. Read on to learn what to think about and look for when buying shrimp.

What to Look for When Buying Shrimp

Most shrimp available for eating in the US are decapods, meaning ten-legged. They’ve got a soft exoskeleton that is easily peeled away, and a head that is easily popped off (and sucked out, if you’re so inclined). The flavor of shrimp varies by where they were caught or raised. As most farm-raised shrimp have little variation in their diets, their flavor is more consistent. But the flavor (and color) of wild-caught shrimp varies depending on how much iodine is in their body and based on what they eat. Most of us think of shrimp as pink, but there are white, brown, red, gray and striped types.

Shrimp come in all different sizes — from the diminutive bay shrimp to giant prawns. But you can pretty much ignore sizing designations like “jumbo” and “large” — they vary from store to store and are completely unregulated. Instead, good fishmongers label shrimp with a set of numbers, like 31/35, 43/50 or sometimes even U/10. These numbers refer to the number of shrimp in a pound — so in the first example, you’ll get between 31 and 35 shrimp per pound, and in the last example, under 10 shrimp per pound.

It is very rare to find fresh shrimp that has never been frozen — even the “fresh” shrimp at many seafood counters are simply defrosted. If you belong to a community-supported fishery (CSF) or have access to a fishmonger you trust, you are very lucky — you may be able to find fresh, never frozen shrimp. (Be sure to ask how long they have been sitting on ice!) For the rest of us, frozen shrimp may be the best bet, because the crustaceans are often frozen just after harvest. These days, individually quick frozen (IQF) shrimp are easy to find, making thawing the shellfish much easier. Both fresh and frozen shrimp may have been treated with sodium tripolyphosphate (STP), a preservative, which can negatively affect the texture and flavor of your shrimp. If buying from a store, ask your fishmonger if the shrimp you are buying have been treated with STP. Frozen shrimp should have the preservative listed on the label, if used. 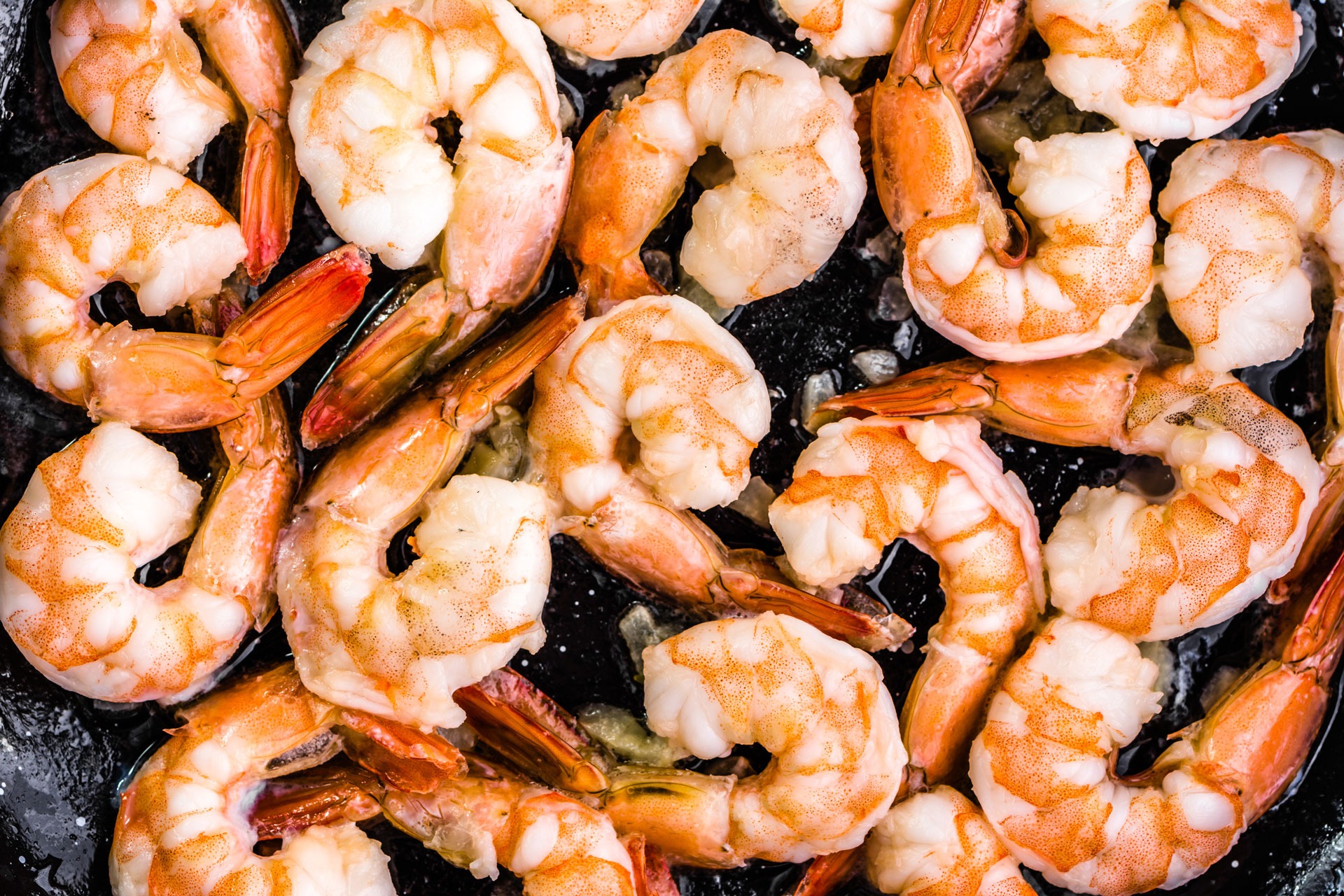 Farmed shrimp can be raised in saltwater coastal open ponds with some water circulation, inland ponds or in closed indoor systems. Shrimp farms run the gamut from the more sustainable closed indoor systems, to the truly dismal. On the dismal side, native mangrove forests and other coastal wetland ecosystems are being destroyed at a rapid rate by coastal shrimp farms, which are built where saltwater is easily accessible for the ponds. Consumer Reports notes that if shrimp ponds are not carefully managed, a buildup of organic waste, chemicals and other pollutants can be discharged into local waterways, and the World Wildlife Fund explains that this wastewater can pollute local groundwater and coastal estuaries.

Unclean pond environments and crowding, coupled with the fact that most farms raise only one or two species of shrimp, means that disease is frequent. In some aquaculture operations, antibiotics and other chemicals may be used to combat these problems. Although antibiotics are technically prohibited for shrimp raised for the US market, they are still used in some operations, which is dangerous, in part, because the use of them could lead to antibiotic resistance.

Wild harvested shrimp is not always better for the environment, as the NRDC points out. In poorly managed shrimp fisheries, wild-harvested shrimp may be caught using destructive trawling methods that can destroy the sea bed, and that results in excessive bycatch of other species, including sea turtles. The US shrimp harvesting rules are stricter than those of other countries regarding bycatch reduction.

Flummoxed by all of the different shrimp choices out there, and looking to make a sustainable and ethical choice? Check out Monterey Bay Aquarium’s guide to buying sustainable shrimp. Also look for Marine Stewardship Council (MSC)-certified shrimp, increasingly available at many retail stores, and avoid imported Thai shrimp. Learn more about seafood labels in our food label guide.

In the US, wild brown shrimp have a peak season from May through October, while wild white shrimp are caught mostly between September and January.

The term “shrimp” usually refers to crustaceans in the order Decapoda, although other shrimp-like animals may be called by that term (or by the word “prawn,” especially in England). They can be caught in the wild or farmed. According to Jack and Anne Rudloe, authors of the book “Shrimp: the Endless Quest for Pink Gold,” over 70 percent of the shrimp on the market were farmed.

Barry Estabrook, reporting in 2015 on Civil Eats, explained that the six billion dollar Thai shrimp industry is based on slave labor, with slaves primarily from Burma and Cambodia being forced to work 18-hour days amidst threats of violence and little food. Read The Guardian’s 2014 heartbreaking, in-depth report on Thai slave labor for the shrimp industry for a deeper dive. It’s not clear that any of these conditions have significantly improved.

Both Harold McGee and Jack and Anne Rudloe note that fresh shrimp can be kept for quite a while — McGee says for up to two weeks without spoiling, and the Rudloes note that the older the shrimp, the more deliciously “shrimpy” they will taste. (They liken this to dry-aging meat.) Head-on shrimp are far more perishable, however — although they are much harder to find in the US. Shrimp can be safely kept frozen for months.

The dark line that runs across the back of shrimp, commonly called the “vein” or the “sand vein,” is actually the digestive tract of the animal. It won’t kill you to eat it, but the vein can be gritty and you might find it unappelaing to eat shrimp poop. There are a couple of different methods for deveining, but the easiest is to use sharp kitchen shears to cut open the back of the shellfish, and then remove the vein with the tip of the shears.  Also check out Consumer Reports’ guide to how to prep and cook shrimp safely to avoid food-borne illness.

Shrimp are delicious steamed, barbecued, boiled, fried, poached, sautéed and baked. They are eaten raw in sushi, and sometimes even alive — although the ethics of this has been questioned. A great way to eat shrimp is a simple shrimp boil with a lot of Old Bay seasoning, beer and lemon: just bring a large pot of water to the boil, add 2 bottles of beer (lager is good), lemon slices and a few heaping tablespoons (or more) of Old Bay. Add the shrimp, shells on and de-veined, and cook until they are done — about 5 minutes, depending on the size of the shrimp. Peel and eat. Try making salt-baked shrimp — an easy, delicious way to cook the little crustaceans. Shrimp pair beautifully with citrus, chiles, fresh herbs, tomatoes, corn and corn meal (as in shrimp and grits) garlic and other alliums, beans and bacon.

Shrimp are an excellent source of low-fat protein. The little crustaceans are high in Vitamin B12, iron, phosphorus and especially selenium, a nutrient important in reproduction, thyroid function and protecting the body from infection. They’re also a rich source of omega-3 fatty acids. The perceived nutritional downside to shrimp is the amount of cholesterol they have — just four large shrimp accounts for about 14 percent of your daily cholesterol intake. However, the US Government’s revised 2015 Dietary Guidelines removed their recommendations on restricting dietary cholesterol, noting that, for most Americans, diet has little effect on cholesterol levels. Good news for shrimp lovers. Shrimp and other crustaceans are one of the most common, and most dangerous, food allergens. They also most frequently develop in adulthood.