Earth’s species are disappearing at a rate that some scientists have dubbed “alarming” and as a result, biodiversity is taking a nose dive. Lately, a fair amount of discussion around the topic centers on the devastating impact that this rapid clip of species loss has on ecosystems.

Some of the conversation in conservation circles focuses on biodiversity richness as essential to humans’ appreciation of nature. Around the topic of food, there’s an emphasis on the ways certain agricultural practices support crop biodiversity, or the ways chemical-dependent agriculture negatively affects soil microorganisms, fish and birds and so on up the food web. It’s easy to understand how intensive agriculture might displace and disrupt surrounding ecosystems. But often missing from the conversation are the impacts this has specifically on Indigenous food gathering and growing methods and the relevance of their practices for maintaining biodiversity in the first place. 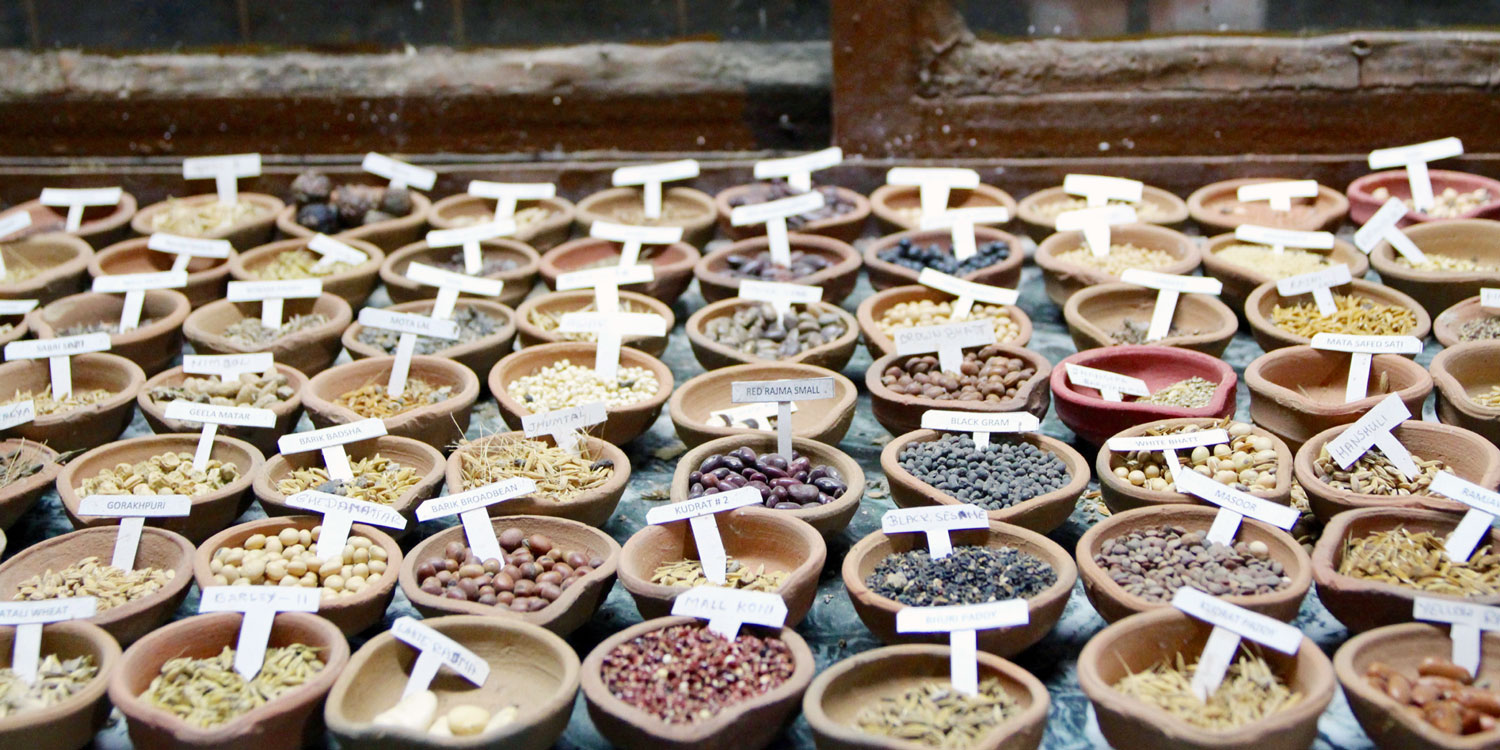 A recent report from the Endangered Species Coalition (ESC), entitled “Justly Biodiverse,” moves biodiversity into a broader forum, connecting some dots on the ways biodiversity is essential to food sovereignty and food security and a host of other social justice issues, especially as they relate to communities of color. One example cited here concerns “colonialist” intensified land use to raise tropical foods like sugarcane and pineapple outside their range, which has contributed to the loss of topsoil, native plants and foods important to Indigenous communities. For Indigenous food systems, which draw from an array of both wild and cultivated foods, that disturbance has frequently caused traditional foodways to disappear — and this legacy continues. Industrial-scale growing of non-native foods also “carr[ies] the fraught legacy of the horror of human treatment” in raising these crops, says Jeanne Dodds, ESC’s creative engagement director.

The report’s food section covers a variety of both well-discussed and quieter ideas about the impacts of biodiversity loss and how these play out for communities around the globe: how chemicals harm critical pollinators, how agriculture impedes hunting and foraging activities and how changes in land use accelerate the climate crisis.

Observing Indigenous foodways and their interconnectedness challenges the traditional boundaries between cultivated and wild ecosystems, showing the need for more nuanced discussion around biodiversity and food that goes beyond heritage breeds and heirloom crops. As we think about designing a more resilient food system for the future, including more diverse voices is the only way to ensure the existence of resilient agroecosystems that meet the needs of both people and wildlife — not just one or the other.

For Dodds, a core problem behind the current conversation about biodiversity is “the way plant and animal species have become invisible in a landscape, and the lack of connection many of us have to place,” she says. Indigenous and other communities that have been connected to specific parcels of land for generations, however, are more likely to retain these connections and to recognize changes as they occur.

Lauren Baker, senior director of programs for the Global Alliance for the Future of Food, which recently put out two reports that touch on biodiversity and food, agrees with Dodds’ assessment. “We need to re-embed biodiversity into our daily activities and reacquaint ourselves with the land we’re living on,” she says.

Our myopia about our place and function and impact in and on the habitats we occupy has had wide-ranging negative consequences. Dams built on the Snake and Columbia rivers through the 1970s “had a tremendous detrimental effect culturally for Indigenous peoples [such as the Nez Perce] but also for the salmon and all species that rely on salmon,” Dodds says. By November 2021, things were already dire for precipitously declining salmon species when intense storms flooded the beds where some had already spawned. It was feared that the entire stock washed away, threatening food security for Indigenous communities — as well as for myriad other species who rely on that salmon, including endangered orcas. “When we reduce available habitat for species, we’re effectively removing our safety net, because we’re limiting the space where climate change adaptation can take place,” Dodds says. “That limits species’ ability to survive, [including] our own.”

Gary Nabhan, an agricultural ecologist at the University of Arizona and author of, among other books, “Ethnobiology for the Future” and “Food from the Radical Center,” also finds multi-tentacled biodiversity lessons in water systems. The 1,500-member Seri tribe lives alongside the Gulf of California. Until recently, they only ate wild food resources — some 96 species of plants and animals in all. The tribe “has the only remaining wild fish and shellfish nurseries in the whole Gulf of California,” Nabhan says. Unlike other (non-Indigenous) shellfish aquaculture entities, they’ve never permitted wetland dredging along their 50-mile stretch of coast (dredging has the potential to harm other, concurrent species). As a result of this Nabhan says that “eelgrass, which is a coastal marshland grass, grows from Alaska down to seed the lower states but the only place it seeds in abundance is in [Seri] territory.” Critically, both fish and Seri consider eelgrass food.

The tribe’s protection of the water protects their estimated $35,000-per-hectare fish yields. But Nabhan says all the fisheries within 100 miles of the tribe’s territory are similarly protected by the Seri’s stewardship. “The point is,” he says, “where we have people who care about wildlife habitats, there’s carry-over into healthier food systems both for wildlife and for human consumers.”

As a further example, Nabhan mentions crop wild relatives; these are wild species of cultivated foods that still exist in forests and fields throughout the world and which, in a seed breeder’s hands, can infuse crops with resilient traits such as disease- or heat tolerance. “We’re already hitting such climate restraints, especially in the arid two-fifths of the United States,” Nabhan says, pointing out that many temperate-adapted crops in the US are reaching their thresholds when temperatures soar to over 95 degrees. Without the traits of crop wild relatives to draw on, “We’re going to have crop failure in arid lands if we keep on having catastrophic heat waves like we did in Oregon, Washington, British Columbia and the Yukon this past December,” Nabhan says.

Development and the ravages of climate change are driving crop wild relatives to extinction, sometimes before we’ve had a chance to collect them or understand how they might benefit us. The loss of the habitats they exist in, though, represents an even greater loss of biodiversity — not just of plants that might help breeders develop resilient crops, but of the sorts of nutritious and culturally relevant plants Indigenous communities have traditionally foraged and which the ESC report points out are also becoming more valuable to urban dwellers, and of the animals that depend on them.

“Western thought reinforces the idea that, through science and technology, we can pick and choose the parts of the environment we want to protect — adapting nature to our human needs rather than acknowledging that we ourselves are part of the landscape being impacted,” says Patuxent riverkeeper Fred Tutman in the ESC report.

And yet, there are signs that non-Indigenous humans do have the ability to learn some important lessons from Indigenous knowledge-keepers, about connection to the land and the importance of conserving habitat for a wide range of positive impacts. In Arizona’s Coronado National Forest, which represents the northernmost range for certain wild chiles important to various communities, 5,000 acres have been set aside to protect them. Monitoring the area identified 35 more wild crop relatives, including wild beans, wild cotton, wild strawberries, wild walnuts and wild grapes. The impulse to protect one wild species led to the discovery of “one of the richest biodiversity hotspots in the entire borderlands,” Nabhan says. Additionally, protecting this area for chiles and other plants protects the wild pollinators associated with those species, which likely go on to pollinate crops in the farms and orchards of the Santa Cruz Valley nearby — a continuously rippling effect.

The wild chiles also help crystallize an even more essential role for public lands, beyond their utility for our enjoyment. “What does wild land preservation have to do with agriculture?” Nabhan asks. The answer may very well turn out to be: everything.