While most of the country was busy shutting down in March, a group of produce farmers, seafood harvesters and food producers were quickly working to launch Maui Food Hubs. The Haleakala Chapter of Hawaii Farmers Union United (HFUU), had talked for years about establishing a food hub, forming a committee in late 2019, but when the pandemic hit, they were still looking for both a location and financing.

“We went into high gear and came across several other entities who were working on parallel projects and quickly formed a consensus movement,” said John Dobovan, President of the Haleakala Chapter of  HFUU. “In just 3 weeks we bought software, built a new website, worked out hub locations with several local businesses and launched the first pickup site. We are planning a total of at least 6 pickup sites for Maui plus home delivery.”

As empty grocery store shelves continue to greet shoppers across the country, the closure of pork processing plants sparks fears of shortages, and the entire US food production system appears vulnerable to the pandemic, food hubs across the country are continuing to feed their communities, offering glimpses of what resilient local food supply chains could look like. 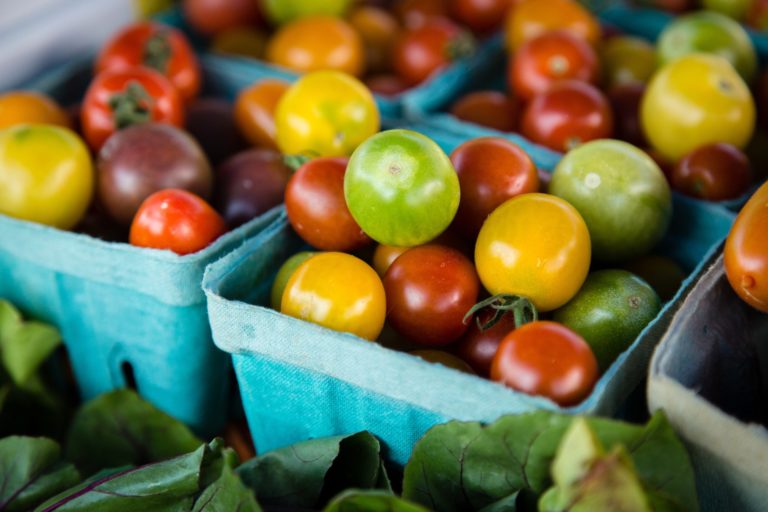 What are Food Hubs?

Food hubs are a crucial part of local and regional food systems and are one of the reasons you see local tomatoes at your supermarket or find salads made with local greens on restaurant menus. They help small and mid-size farms grow their customer base by pooling products from many area farms and selling it to larger institutions including school districts, restaurant groups and more. The USDA’s Agricultural Marketing Service lists more than 240 food hubs in its directory, and each of those food hubs is slightly different.

“It’s a way to aggregate larger volumes of food to schools,” said Arlene Jones, the executive director of Sprout in Little Falls, Minnesota, who also co-owns The Farm on St. Mathias. In addition to school districts, Sprout sells food from more than 100 small farms to local restaurants, resorts, at its own indoor marketplace and through a 100-plus member CSA. The food hub also provides educational training to farmers, and partners with local chefs to provide cooking and nutritional classes at different organizations including one for veterans and one for those recovering from opioid addiction.

While many food hubs, like Sprout, or the Northwest Connecticut Regional Food Hub (NWCT Food Hub) in Connecticut, formed primarily to sell large quantities of local food to school districts, restaurants and other institutions that small farms would otherwise not be able to serve, others like Urban Agrarian in Oklahoma City function primarily as a grocery market.

“There are a wide swath of different things food hubs focus on,” said Oklahoma City’s Urban Agrarian co-owner Chelsey Simpson. “We’re primarily a local grocer but we’re doing more than that: we do our own sourcing, sell to restaurants and larger buyers and have two retail locations. We buy from about 70 different local farms and food businesses over the course of any given year.”

How Food Hubs are Feeding Their Communities During the Coronavirus?

With the majority of schools and restaurants closed, many food hubs used to selling to larger institutions are pivoting to help their buyers focus more on direct to consumer sales.

The NWCT Food Hub has seen a higher demand for local, sustainably grown food in their area, including from individual consumers, and adjusted what and how they sell in order to be able to meet the need.

While it’s not yet prime harvest season in the area, in order to increase what they can offer, they are “piecing together vegetables from farms who have storage crops (beets, potatoes from the previous growing season) and greens grown in high tunnels,” said NWCT Food Hub manager Renée Giroux who also owns Earth’s Palate Farm.

Connecticut’s only food hub, NWCT Food Hub recently launched a new website to help expand its reach in the farming community and with the wholesale-buyers they serve, including local grocery stores.  As they’ve seen more demand in direct to consumer sales, they’ve also begun partnering with local restaurants interested in offering farm shares to area residents.

“We have over 30 farmers on board, so I feel we can meet the demand,” Giroux said. “We are also working with Marty’s Local, another food hub located in the Great Barrington area. I believe if we come together as a region we can overcome obstacles and meet the growing demand for vegetables, meat, dairy or bread.”

But some food hubs offer more than just their product. Sprout hasn’t seen sales affected but has had to cancel or restructure some of their educational programs including a technology-free food safety and monetary guidance class for Amish farmers, and cooking and nutritional classes for veterans where it would be impossible to practice social distancing.

"We’ve seen the shortages on the national level and it’s given us the chance to say ‘hey, it’s a lot of work to sell local food but with customer support, it’s a viable business model.'"

For many food hubs, continuing to serve their community means a continued focus on reducing food waste. There’s been outrage in recent weeks over images of farmers forced to dump milk, plow over vegetables and destroy edible food, with many of their normal buyers closed and no way to move their food. But food hubs’ ability to quickly adjust to market conditions and pivot to online and direct to consumer sales means their farmers still have customers.

“Because we’re working with small family farms, and we’re a tight-knit operation, we’re able to be very nimble and adjust and tweak to react to a crisis situation,” Keane said.

But their commitment to reducing food waste didn’t start with this crisis. Sprout has two fully licensed kitchens where they can process excess foods. They have also been known to donate excess or about-to-spoil produce to hog farmers they have relationships with.

“We are able to make use of the kitchen to use what doesn’t sell through sales,” said Simpson. “For instance, we buy a confident amount of fruit to make sure our shelves don’t go bare and turn any extra into fruit filling for hand pies. Or we can take in the excess crop from farms — say a farmer has number 2 grade tomatoes while we normally sell grade 1 tomatoes, we can turn the tomatoes into salsa which prevents waste and gives us an added product.”

What will the Post-Pandemic World Hold for Food Hubs?

While it’s impossible to know what post-pandemic food supply chains will look like, for hubs like Urban Agrarian, that have seen an increase in sales, the hope is that people will still find a good reason to prioritize buying from them and see the value of supporting local food.

“We’ve seen the shortages on the national level and it’s given us the chance to say ‘hey, it’s a lot of work to sell local food but with customer support, it’s a viable business model,” said Simpson.

On Maui, where the vast majority of food is imported, the hope is that the food hub can grow to replace at least some of Hawai’i’s imported food with locally grown food.

“We are small scale right now so our own chain is short: just farmers making weekly deliveries to our hubs,” said Dobovan. “That leaves a lot of room for growth and we would like to see Hawai’i get as close to 100% locally grown as possible. Every ton of food that is imported adds half a ton of CO2 into the atmosphere just for ocean transport. Locally grown food invigorates the economy, is fresher and therefore more nutritious and much better for the planet.”