Gibson truly lives by one of his favorite Michael Pollan quotes: “Shake the hand that feeds you.” You can regularly find him at Manhattan’s Union Square Greenmarket, preaching the good word of grassfed, or at his Hudson, NY, diner Grazin’ – the first Animal Welfare Approved restaurant in the world – where you can taste his grassfed beef first hand. Gibson took some time away from the farm to chat with us about his cattle, the industrial beef system and how beef farming can be more sustainable.

In 2002, you left a corporate job to start cattle farming. What inspired you to make such a big change?

There was a confluence of circumstances, not the least of which was 9/11, which impacted my family. My daughter was a student at NYU; her dorm was down at Wall Street and Water Street and she was bombed out of her building. My son dropped out of Pace University and joined the military. I was in the corporate world working with people on Wall Street, so I knew some people who were much more impacted than us, but those things just kind of gave me pause. I had just read Michael Pollan’s “The Omnivore’s Dilemma” and that became my bible. I wanted to do that and became very passionate about grassfed, pasture-raised and Animal Welfare Approved. 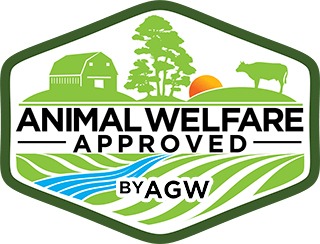 Your farm was the first New York City Greenmarket farm to be Animal Welfare Approved. Why was that important to you?

What I admire is their independence and their unabashed concern for animal welfare. They don’t take a fee from the farmer. [With certificates] like organic, there’s a fee and it’s a business. Animal Welfare Approved is just interested in the welfare of animals.

We knew that we treated [the cattle] right, but we also wanted to make sure that they were processed correctly. So, we insisted our processing plant become Animal Welfare Approved, and they did, and we’re now their largest customer. So, we not only ensure the cattle are raised with respect, but also that they die with respect, and that’s very important to us.

Grazin’ Acres raises cattle in a way that’s different from most farms. Can you tell me more about your sustainable farming practices?

Our cattle always have access to the outdoors. They’ve always got access to grass, even in the dead of winter. Even when I’m taking them grass, it’s down on pasture, not on concrete or in a barn. They have a running shed to get out of really bad weather, but for the most part they could care a less about cold and snow.

And you also use a special kind of grass as feed, and grow the cattle longer than is typical, right?

We have cultivated some special grasses, but we’re also not concerned about weeds. We look at weeds, which often have deeper root systems then shallow grasses like ryegrass, as a different mineral delivery system. Burdock is one example. Burdock is not typically the kind of thing a farmer wants to see in his field but — when it’s young — the cattle love it and eat it like crazy because it’s got minerals that they want.

The grasses that we focused on are high sugar, high carbohydrate grasses because the microbes in the rumen need energy to break down the grass cellular walls. Grass is one of the few things as humans we can’t eat directly for nourishment, but we can eat things that are meant to eat grass. We’ve got nice rye grass and orchard grass, both of which have high sugar and carbohydrate content. And then legumes are mixed in, usually broadleaf clover, that also takes nitrogen out of the air.

Time is money, and doing grassfed right is expensive. Our animals are all more than three years old and more than 1,300 pounds when they’re processed, [rather than the typical 15 months and 1,000 pounds]. That last 300 pounds is going to take a year and half or so, because 80 percent of every bite goes to just maintaining their current weight. But the real benefits of grassfed are largely in the fat, not so much the meat [and you need that time for well-marbled meat]. You don’t want the fat from corn-fed; the fat from grassfed is where the benefits are.

All summer long, we’re making as much hay as we can to prepare for the winter when on a typical day will need 10 to 15 large round bales of dried grass or, in some cases, wet grass that we’ve stored. Every day we open gates to allow the cattle to move to the next pasture; in the winter we take the hay to them on pasture with a bale spear and a tractor.

Then of course we’re moving the chickens behind the cattle and we’re feeding our pigs as well. The pigs get organic soy-free grain just like the chickens do, but the pigs also get a lot of organic non-meat scraps from our restaurant.

That restaurant, Grazin’ Diner, was the first Animal Welfare Approved restaurant in the world. What made you open the diner?

Fifty percent of every animal we process is ground meat and having an organic burger joint that my family could eat at was just a kind of a goal. We realized we could sell a lot of steaks but we’d have to sell our ground meat very cheap to restaurants and they didn’t, at the time, necessarily all get the benefits of grassfed, nor were they interested in paying for it.

Great food starts with great ingredients and I wanted to have a place that was simple and had great ingredients. All of our potatoes are local when possible, and they’re always organic and fried in organic oil. All of our meats come from us and we even had a small dairy at one time that was doing the cream for the coffee. It’s all clean and we felt like people would recognize that and be willing to vote with their wallet on a daily basis for people who are doing it right, so we also made it Animal Welfare Approved as well.

What is your favorite aspect of farming?

The animals are a favorite. Time with my family is a favorite; that’s something I sacrificed when I was in the corporate world. Today, my son is my partner and he runs the farm. My son-in-law, my daughter’s husband, runs the restaurant. I have four grandkids that live on the farm with my son and daughter. So that’s probably my favorite thing. I also enjoy being prepared for winter. There’s something primal about farming in a way that you know you’re preparing for the worst that winter can throw at you and then you know, surviving it. We work all summer to prepare for winter and work all winter praying for summer. It’s kind of a vicious cycle.

The farming industry has struggled in the past few decades with a variety of issues, including changes in the market, decreased governmental support and issues with climate change. What have you done to stay profitable amidst the changing farm landscape?

Well in the last year, thanks to New York State law related to farm distilleries, my son started a distillery. He’s got an organic grains bourbon on the market now, Grazin’ Spirits. And we have a peach grove on the farm that we planted years ago and he makes a peach whisky from that. So we’re always looking for things, [like the distillery or the diner], that will expand our philosophy and hopefully our profitability.

What are the biggest issues facing your farm?

We would love to have more visibility of who we are and what we do. Somebody in the family actually goes to every Greenmarket, because we feel like it’s important that consumers have the opportunity to look into the eyes of the actual farmer and ask questions. We hire people to help load and unload and sell things, but we’re there as well. I wish I could afford to have more people on the farm that could help with marketing aspect.

I’d like it if more and more people voted with their wallets every day. I think that they don’t recognize that when they eat meat that comes from a place they don’t know, that it probably is from gestational cages or a CAFO. Wendell Berry said that eating is an agricultural act, and I think that what he meant by that is when you eat, you’re voting on how that animal was raised. It’s really important to not turn a blind eye and think that your beef just comes from a Styrofoam plate covered with cellophane at the grocery store. It doesn’t. It was a living animal that needs to have respect and the only way we can drive this is talking to one consumer at a time.

The FoodPrint of Beef

For in-depth information on beef and its sustainability issues, read our report, The FoodPrint of Beef.

What could the government do to help establish a more sustainable food system?

The farm bill always supports the growth of No. 2 corn and that’s a problem because it’s being used in CAFOs at a cost less than what it takes a farmer to grow it. That is not a level playing field. I’d be happy with a level playing field. I’m not asking that they subsidize grass, but don’t subsidize an unhealthy competitor to grass. It doesn’t make sense. You’ll hear the argument that you can’t feed the world just on grass, but it’s not true. You can. There’s a lot of grass available, we just have to focus on it.

The largest ground beef Salmonella recall to date happened recently. What do you think should be done to avoid situations like this?

What I think is: How many times do we have to have this lesson taught to us? There was an article from the New York Times about 10 years ago, The Burger That Shattered Her Life. That burger almost killed her and left her in a wheelchair. This has happened before and it’s going to continue to happen and the ways to fix it are not what our government has mandated. They’re not right and we know what the solution is. I don’t use any antibiotics, I don’t have to. My cattle don’t get sick. They’re outside, they’re eating grass, it’s what nature intended.

Maybe the price of beef would go up and be less affordable, but I think that’s a good thing. I think that we eat too much meat as Americans. I produce livestock, and I think we eat too much and it should be more expensive. Fifty years ago, 10 percent of your paycheck went to healthcare and 40 percent or so went to food. Now, it’s the exact opposite. Is there any guess as to why?

What do you think the future of beef farming is?

I do believe that the current industrialized system is not sustainable and that it will change, but I don’t know how fast. I’m counting on that one consumer, one farmer at a time thing right now, because that’s something that I can contribute too. I don’t think there’s a sea change coming that’s led by our government, but I do believe that at some point there will be enough of the grass roots, ground root movement that there will be a sea change. It’s just not next week.

I’m a vegetarian when I go out to dinner. I have pasta or salad all the time. Sometimes it’s seafood, if it’s sustainably caught, but I’m asking that question to my server because I want that sea change and the only way it does is if people speak up.