For a treat that’s meant to spark human happiness, chocolate is paradoxically synonymous with a whole lot of suffering. The industry’s latest scandal comes in the form of a report leaked in April, which found that child labor had risen in Ghana and Côte d’Ivoire, from 30 percent to 41 percent over the 10 years that large-scale chocolate companies had pledged to reduce it by 70 percent. Compounding the scandal is another leak, a response by Big Chocolate seeking to “spin the report, obfuscate, deny, and deflect rather than deal with it appropriately,” says Etelle Higonette, senior campaign director of global environmental nonprofit Mighty Earth. She further points out that Covid-19 has worsened the report’s numbers by an additional 15 percent, with “schools shutting, supply chains disrupted, purchasing off, prices down.”

And then, of course, there’s the deforestation that occurs wherever cocoa plantations arise — that’s increasing, too, also despite pledges and much industry handwringing. 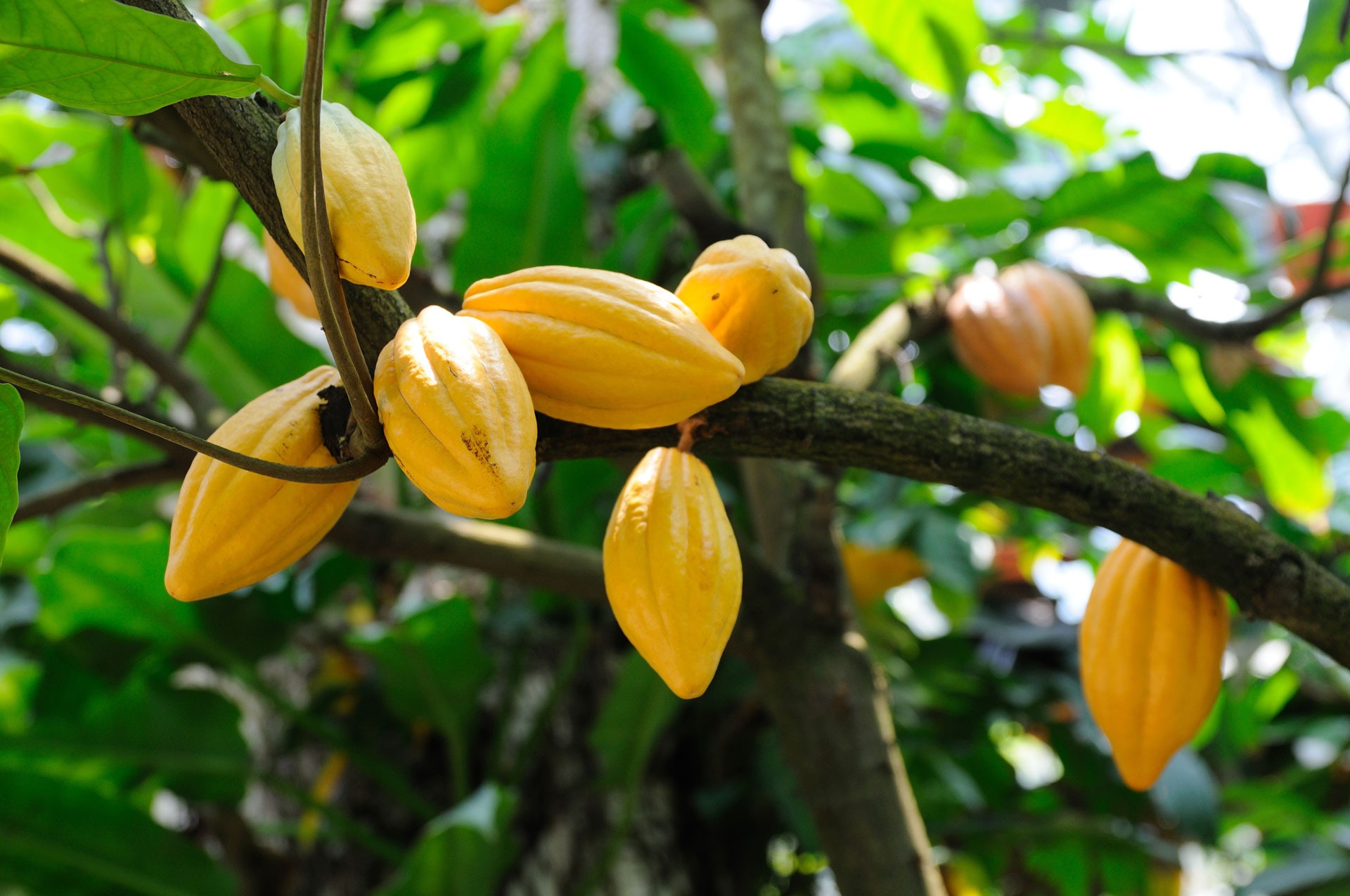 Offering themselves to consumers as an alternative to Big Chocolate and the various ills it engenders, smaller, “ethical” companies promise to abolish child labor from their supply chains, to stanch deforestation, to pay living wages to farmers, while offering consumers products made from higher-end, tastier heirloom cocoa beans. Companies like Alter Eco, Chocolats Halba, Divine, Tony’s Chocolonely, and even Valrhona, says Higonette, “encompass a lot of positive things: better pay, more direct relationships, more ethical contracts more ethically negotiated, often connected to agroforestry systems” to counter soil-depleting monocultures. And although she asserts that none do every single thing perfectly — “Tony’s is great about slavery but said they didn’t even know about deforestation,” Higonette says, while companies that rely on Rainforest Alliance certification “are maybe not so good for people.” Regardless, she says, change has to start somewhere, and these companies, by doing some things better, put pressure on Big Chocolate to change.

What might that change look like? FoodPrint talked to Tim McCollum, CEO of Beyond Good (formerly Madécasse), a small chocolate company that devised its own model for ethical chocolate — inspired in part by Italian chocolatier Claudio Corallo, who McCollum says “was the first person we ever heard of making chocolate in Africa,” thereby proving it could be done. Making chocolate at origin in Madagascar (and soon, Uganda), Beyond Good says it has succeeded in slashing its supply chain and paying its farmers and factory workers a more livable wage. It’s also got a mission to re-establish forest and protect lemurs and other wild inhabitants, giving eco-conscious consumers another reason to choose Beyond Good’s bars. Is the model perfect? Probably not. But it could offer some useful lessons.

Did any of your farmers grow cocoa before working with you?

When a lot of them started working with us, about 25 percent of [their acreage] was cocoa, then they had rice planted as a subsistence and sellable crop, and some other intercropping like citrus and jackfruit, as well as vegetables. Fast forward 10 years and we’ve got some farmers now who have 70 percent cocoa. It’s cocoa forestry integrated with other crops and shade trees, [which] provides substantially improved income for cocoa farmers.

You were novices to the food industry when you started. Why chocolate?

Madagascar is incredibly biodiverse; 15 percent of the plants and animals in the world are only found in Madagascar. The flip side of that is there’s a lot of habitat loss. When I was there as a Peace Corps volunteer in 1999, l’d travel the same road 150 kilometers to get to a phone. When I first started, the forest would come to the edge of the road. Six months later, you could see the forest receding from slash and burn agriculture. It was driven not by corporate timber interests but by poverty — people cutting down wood to make fire to boil rice to feed their kids.

We thought of cocoa farming because when it’s planted well, you plant five new cocoa trees with one shade tree, so you’re actually generating second-growth forest. A small cocoa tree needs shade or it’ll be crushed by the sun, so farmers put a banana tree right next to the cocoa tree and they grow almost at same rate.

Is your model able to lift farmers and other workers out of poverty?

It doesn’t happen overnight. It’s taken us about five years, working with two medium-size producer groups and one smallholder group, to get them — not out of poverty, but out of relative poverty. There are things they can do now that they couldn’t do five years ago: sending their kids to school, feeding themselves, throwing up a satellite dish on top of their hut. We have another three groups of farmers we’re onboarding now to meet next year’s demand, and now that everyone knows how successful our farmers are, we have a larger base to build on.

For workers [in our factory], pay scale varies depending on skill level. This is easy for me to say, but it’s a lifechanging type of thing. The formal economy of Madagascar is made up of about 10 percent of people; they have a job they show up to, it’s structured, they get a paycheck every week or month. For 90 percent, it’s informal; they barter, do subsistence farming, buy a lot of batteries in one town to haul to another town to sell. A steady, inside job is quite an accomplishment.

Against your own mission, you moved production to Italy for a while. Why?

For the company’s first seven years our chocolate was 100 percent made at origin. We hit the ceiling in 2014-15 with what the local factory could handle, and the more we understood about food production, the more we realized they weren’t well organized and that the only way to stay true to our model was to build a new factory from scratch, with Western food safety requirements front and center. We pulled production out of Madagascar while we built a new facility and moved it to Italy, which was a hard blow. But every bean we sent to that factory we hand sourced from our farmers in Madagascar, and the only middleman was us as exporter.

Are there things that have allowed you to be successful in Madagascar?

We speak the local language, which helps. We also gave the farmers a contract that said, As long as you meet our quality specifications, we will buy every cocoa bean you bring to us. Along with the higher price for [growing heirloom] beans, the contract gave farmers incentives to farm better and figure out how to get more yield from their land; it turns them into cocoa entrepreneurs.

The other thing we did was break the supply chain model. Typically, what a cocoa farmer does is harvest a pod and sell it to a collector; the collector takes it to another collector, who takes it to an exporter. Then the exporter does the drying and fermenting and gets it on the container [for export]. We were adamant that farmers could do the drying and fermenting themselves. It got them out of the mindset that they were just plucking stuff off a tree. They had to organize better, keep diligent paperwork about who was bringing in what volume and how long the beans were in the fermentation box, do quality checks. They were acquiring skills, and with that comes a certain amount of pride.

We also include farmers in the entire process. We bring them into the factory and show them beans being roasted, teach them how to temper and grind. It sounds cheesy but it makes them feel like they’re part of the process.

How important is the supply chain to improving conditions for farmers?

Any chocolate company [that is] drawing from the existing industrial supply chain…is not going to fix the problem. The supply chain structure is what keeps farmers living in poverty. It’s hard for anyone to make a living farming a commodity crop on a small scale. It’s physically impossible if that commodity has to pass through four to six intermediaries to get from the farmer to the factory processing the raw material.

The problem [in the chocolate industry] is poverty. Which is a direct result of the supply chain. A new supply chain needs to be built, a supply chain that looks nothing like the industrial supply chain. Until that happens, most efforts are a waste of time and money. About the Fair for Life Label

You used to be Fair For Life certified — and consumers do rely on labels to figure out if they should buy a product. Why did you stop?

We realized it made no sense for farmers. It stipulated that each farmer had to register as a business with the local government [but] 99 percent of smallholder farmers aren’t registered as small businesses, and there is a high illiteracy rate in rural Madagascar. [Additionally], our business model is increasing farmer income 200 to 300 percent, [versus] 10 to 12 percent. Maybe we’d consider dealing with the bureaucracy if it delivered meaningful results. But it didn’t make sense when our results are an order of magnitude better.

Now we have a team of local technicians who do our organic auditing — we survey every farm annually; that gives us GPS coordinates for every parcel of land we source from, which gives us a whole other level of transparency. Brands need to be trusted to say and do the right things. A third-party entity conducts a bi-annual social impact report, which assesses farmer contracts and standard of living. We didn’t know much about how to use cocoa forestry for lemur conservation and biodiversity, so we continue to work with the Bristol Zoological Society and Conservation International to shape our environmental work.

The Bristol Zoo is going back to Madagascar to do a second study that goes deeper into what lemurs are eating, and documenting the other mammals, birds, lizards in the forest.

Could your model work for other companies?

Our model can be replicated by anyone who wants to replicate it; we figured this out without chocolate or food industry experience. The problems in West Africa are simple — farmers need to make more money. But they can’t be fixed with the current model, because Mars, Nestle, Hershey, aren’t paying farmers; they’re paying exporters, who are paying collectors, who are paying intermediaries. Instead, the chocolate companies are funding billions of dollars worth of aid work, and all that does is create the illusion that the problem being addressed. No one is willing to admit that what’s being put out there as solutions are not working. I don’t think it’s going to get fixed anytime soon.