In soil-based agriculture, soil health is the most important foundation of a healthy farm ecosystem. Yet most of the common farming techniques employed in industrial crop production, such as synthetic fertilizer application and monocropping, can degrade soil over time, causing a cascade of problems necessitating the use of even more man-made inputs, which in turn contribute to climate change. Sustainable and regenerative agriculture seeks to ameliorate soil health, sequestering carbon, storing water and building healthier farm ecosystems along the way. 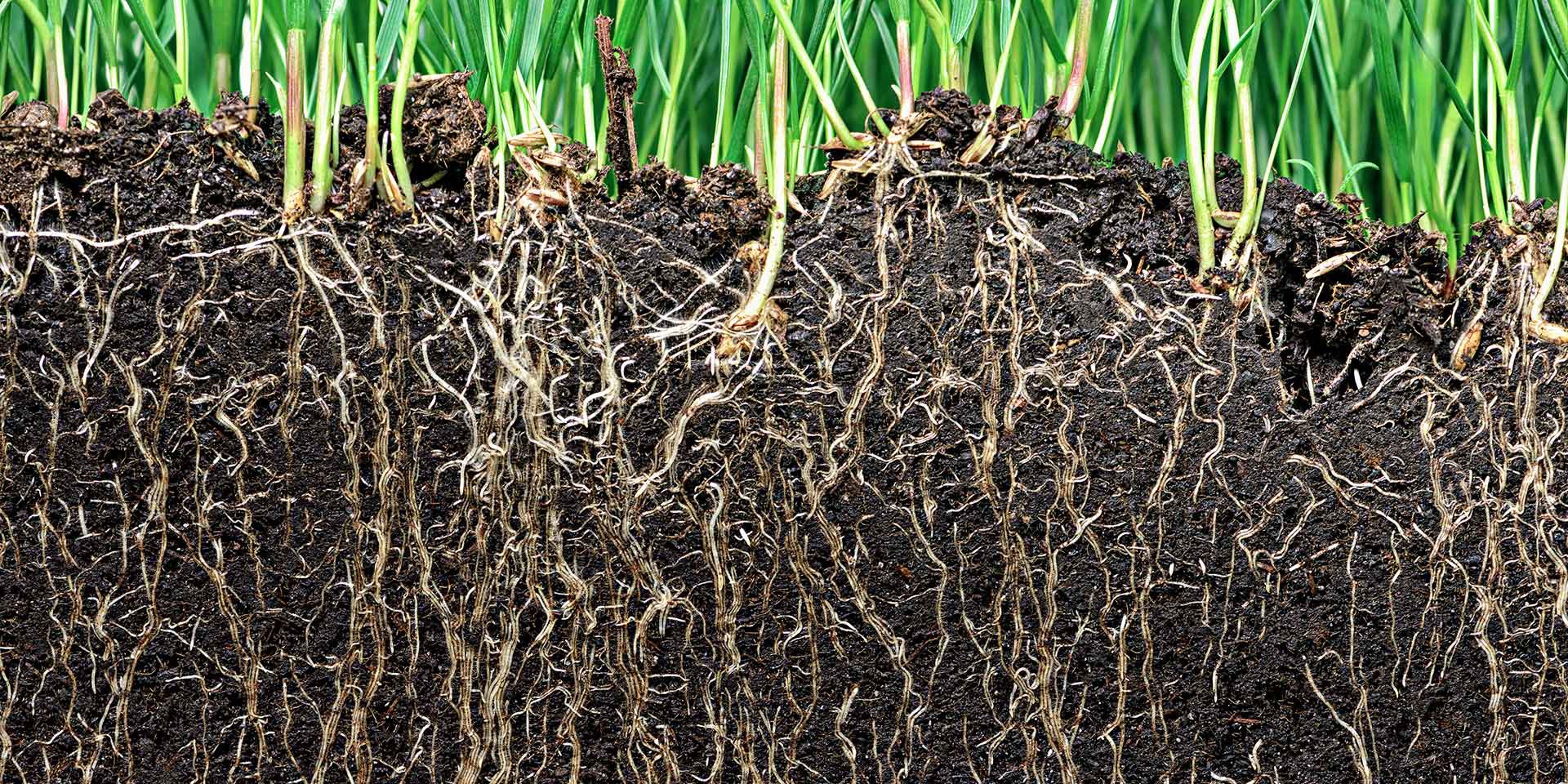 Dig deeper into the basics of soil and why it's important

Soil forms the surface of the Earth. It is made up of various mixtures (depending on where one lives) of minerals, water, air and organic material (including microbes and other organisms). 1

Soil is not static: its composition is changeable, based on the weather, which organisms constitute it, which plants grow in it, and more. 2 Soil, like air and water, is also vulnerable to pollution and can be damaged by industrial farming practices. Soil can also be amended through sustainable practices, like applying compost.

Soils are often thought of as “living” because so many different types of organisms are alive in them, from bacteria to fungi to earthworms. In fact, one teaspoon of healthy soil can contain as many as one billion bacteria, plus fungi, protozoa and nematodes. 3 Healthy organisms in soil — both large (e.g., earthworms) and small (e.g., bacteria) — are important, because they perform many functions, from aeration, to creating pockets in the soil for water, to breaking down organic material and making nutrients available for plants. 4

While soil is technically a renewable resource, it can take (pending the climate) between 100 and 1,000 years to develop — and this formation is so slow, that scientists apply the term “limited” to it, because although it is a natural resource, it is vulnerable to degradation. 5

The Impact of Industrial Agriculture on Soil Health

The Effect of Monocropping on Soil Health

Monocropping is the practice of growing the same crop on the same plot of land, year after year. This practice depletes the soil of nutrients (making the soil less productive over time), reduces organic matter in soil and can cause significant erosion. 6 In the US, industrial farming practices often include the rotation of soybeans and corn. Technically, because two crops are in rotation, this does not get classified as a “monoculture.” However, this “simple” form of crop rotation does not provide the same benefit to the soil as do complex systems (in which three or more crops are rotated over a period of one year or longer). 7 When crops are grown in complex rotation, yields go up by as much as 10 percent in a non-drought year. 8

Monocropping, or even the “simple” crop rotation mentioned above, causes a cascade of problems, necessitating not only the use of synthetic fertilizers (because soil becomes depleted), but also the use of pesticides to control pests, like soil fungi, insects and other agricultural nuisances. Fields that include a diversity of crops (polyculture) are less attractive to insect predators. 9

All plants need nitrogen (N), phosphorus (P) and potassium (K) for healthy growth and productivity. These macronutrients (in addition to other macro- and micronutrients) form the basis of healthy soils. For soils deficient in these nutrients, fertilizer — either made synthetically or from organic materials — must be applied to grow healthy plants. As industrial crop production has escalated during the last 50 years, so has the application of synthetic fertilizers (mainly produced from fossil fuels) to boost plant productivity, in part. Industrial farming practices, such as monocropping and intensive tillage, have also compromised soil health over time.

Some research has found that synthetic nitrogen fertilizer application decreases soil’s microbiological diversity (that is, bacteria, fungi, etc.) or alters its natural microbiological composition in favor of more pathological strains. 1112 Some types of nitrogen fertilizer can cause soil acidification, which can affect plant growth. 13 Excessive fertilizer use can also cause a buildup of salts in soil, heavy metal contamination and accumulation of nitrate (which is a source of water pollution and also harmful to humans). 14

(It should be noted that synthetic fertilizer use isn’t just detrimental to soil: it also contributes to climate change and to water pollution through the release of N2O, causing severe algal blooms in several agricultural areas of the US. Learn More)

Pesticides are chemicals that are used to control weeds (herbicides), insects (insecticides) and fungi (fungicides) in food, fiber and wood production.

Pesticide residues in soil, and their lasting presence in the soil over time, are greatly influenced by both the soil type and composition, as well as by the pesticide type. 15 Depending on the pesticide type, application quantity, soil quality and the environment, some pesticides may be broken down by microbial action in the soil or by other chemical reactions, while others can accumulate in soil. 16 (It is important to note, however, that some pesticides’ metabolites [breakdown products] are more toxic than the “parent” pesticide. 17)

Some studies show that glyphosate (also known as RoundUp) decreases microbial biodiversity in soil; other studies show this chemical’s adverse effects on earthworms. 18 Other types of pesticides may have similar effects on soil microbiology, impacting nitrogen-fixing microbes important to soil health and fertility. 19

Soil fumigants are a type of pesticide designed to kill organisms in the soil before farmers start to plant. Fumigants kill nearly all soil organisms — not just the harmful ones — including beneficial bacteria, fungi and other organisms that help maintain healthy soils. (In addition to killing soil organisms, many of these soil fumigants are toxic to human health and can escape into the environment after application. Read more in the FoodPrint of Crop Production report .) In some cases, as in the production of grapes, fumigants accumulate in soils, often at levels beyond legal limits, also affecting soil microbial health and earthworms, both of which are vitally important to soil health and fertility. 2021

Animal waste from concentrated animal feeding operations (CAFOs), also known as factory farms, spread on agricultural fields can contain harmful microbes and antibiotic and other pharmaceutical residues, which can lead to antibiotic-resistant bacteria in soils. 2223 Antibiotics can stay in soil from a few days to hundreds of days. Some studies show that certain classes of antibiotics, such as tetracyclines, can be taken up by crops. 24

Application of animal waste from industrial animal facilities can also be a cause of heavy metal contamination (stemming from metals used in feed), including copper, zinc and lead. 25

Mechanical tillage and the use of heavy farm equipment can cause both soil compaction and soil erosion if soils are not managed effectively. Soil compaction is caused by heavy farm machinery use and tilling when soils are too wet; compaction has become an increasing problem as farm equipment has gotten increasingly heavier. 2627 Compaction leads to poor water absorption and poor aeration which further lead to stunted root growth in plants and smaller yields. 28

In agriculture, soil erosion usually refers to topsoil particles wearing away through wind, water and through farming activities, like tillage. 29 Erosion is caused by many different factors, but poor soil management, including tilling, can cause significant erosion over time, as can practices such as not planting cover crops in winter and not mulching. 30 Tillage erosion can cause both wind and water erosion as poorly-managed soils are more susceptible to both. 31

Soil erosion is a problem for several reasons. When topsoil (the portion containing natural nutrients and organic material, which plants need to thrive) is lost, soil fertility is lost. In some cases, this loss causes a change in the structure of agricultural soils, which can, in turn, lead to increased susceptibility to drought. 32 Eroded soil can turn into runoff and wash into local waterways, carrying not only soil particles, but any contaminants in that soil (such as synthetic fertilizer and pesticides). 33 Wind erosion can cause significant topsoil loss, as well as health problems, property damage, and harm to crops. 34 Erosion can also be a cause of flooding, as damaged soil cannot absorb as much water as healthy soil.

Soil stores a tremendous amount of carbon; nearly 80 percent of the carbon in terrestrial ecosystems is in soil. 35 Local loss of soil-sequestered carbon has global consequences. Scientists estimate that approximately one-third of carbon dioxide (CO2) emissions (a major contributor to climate change), are from the clearing of forests and the cultivation of land for agriculture. 36 Unsustainable agricultural techniques which cause erosion, such as excessive tillage, and which do not improve soil health (e.g., soil microbes and organic matter), hasten the release of carbon dioxide into the atmosphere. 37 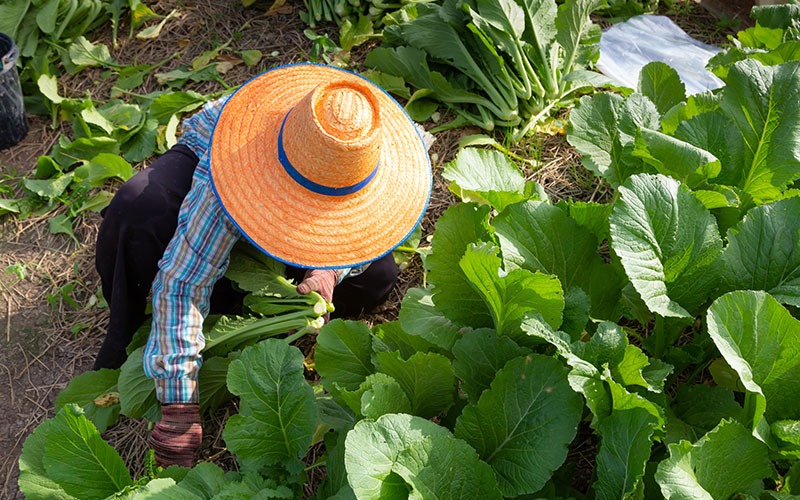 The Benefits of Sustainable Agriculture for Soil Health

Regenerative farming techniques are focused on building soil health through ecosystem-centered techniques, like composting and adding animals into their crop rotation practices. This contrasts with the industrial model, which strips soil of nutrients and results in a negative feedback loop that requires more and more inputs, like synthetic fertilizers, over time. Sustainable farmers use many different techniques to create and maintain healthy soil structure, rich in nutrients, in sustainable agricultural systems without the use of synthetic fertilizers or pesticides. These techniques include:

What You Can Do: