Celery is a ubiquitous ingredient in cooking, but tends to stay out of the spotlight. The eternal supporting player, celery stands out in many ways. Its crisp, juicy stalks with endless fibers pack so much flavor into each juicy bite. It’s no wonder it’s an essential ingredient in mirepoix, the fragrant base for so many soups, stews and sauces. Celery is commonly found on raw vegetable platters with dip, but this versatile plant varies wildly throughout the world, and has a long history of different uses as well.

What to Look for When Buying Celery

Pascal celery, the most readily found in the US, has tall, light green stalks that are thick and very crisp. It’s commonly sold with few leaves, used primarily for its stalks. Celery features fibrous strands along its length, and has a mild, herbal aroma and slightly sweet flavor. Its distinct flavor is exploited in many savory dishes, often sautéed together with carrots and onions for as part of the French tradition known as mirepoix.

In Europe, celery is more commonly grown for its edible root, or celeriac. Celery seeds are also harvested from the plant, used as seasoning such as part of pickling spices. In East Asia, the most commonly grown celery (also known as Chinese celery) has much thinner stalks than Pascal celery, and is more pungently flavored. It’s commonly used as an addition to stir-fries. Celery leaves are very flavorful and can be used as an herb both fresh and dried, much like parsley leaves (a close relative).

Due to its long time to harvest and its inability to withstand very hot temperatures and a lack of adequate water, celery is demanding on its local water supply. California grows the largest percentage of domestic celery in the US — along with roughly half of domestically grown produce. As California faces more intense droughts brought on by climate change, it calls into question the choice of growing such water-intensive crops in the state.

Many commercial farms rely on pesticides to bring celery to harvest. Celery has been ranked amongst the highest fruits and vegetables for carrying pesticide residues by the Environmental Working Group. Because celery ranks so high in pesticide residue, it’s widely recommended to buy organic celery to avoid possible side effects of these chemicals.

Find out when celery is in season

Because it thrives in colder weather, celery is usually sown in spring or fall. It’s regarded as a challenging crop and takes about 130 to 140 days to harvest. Seeds are slow to germinate and are often sown indoors before transplanting to the earth in early spring or late summer to ensure a steadily cool growing season. It’s therefore best grown in mild, temperate climates.

Celery is part of the plant family known as Umbelliferae, along with carrots, parsley and parsnips. It’s a hardy plant that can withstand frost, and thrives in cool seasons and semi-shade. Commercially-grown Pascal celery is also sometimes “blanched,” a process where the stalks are covered with more soil as it grows, prohibiting the production of chlorophyll and resulting in paler stalks. The process reduces the nutritional value of the stalks but also reduces its bitterness, and helps the plant withstand heavy frosts. It’s a process similar to growing white asparagus, the delicate-tasting stalks beloved in Europe. Farmers today can also grow “self-blanching” celery seeds, popularly known as “golden celery.”

Celery grows best in moist, sandy and clay soils, requiring access to much water during its long growing season. Without enough water, celery stalks can become tough and stringy.

Look for unblemished, firm celery and keep it refrigerated until use, preferably covered to retain moisture (airtight container is not necessary). If celery becomes limp, simply trim its base and place in a glass of water in the refrigerator until crisp again. 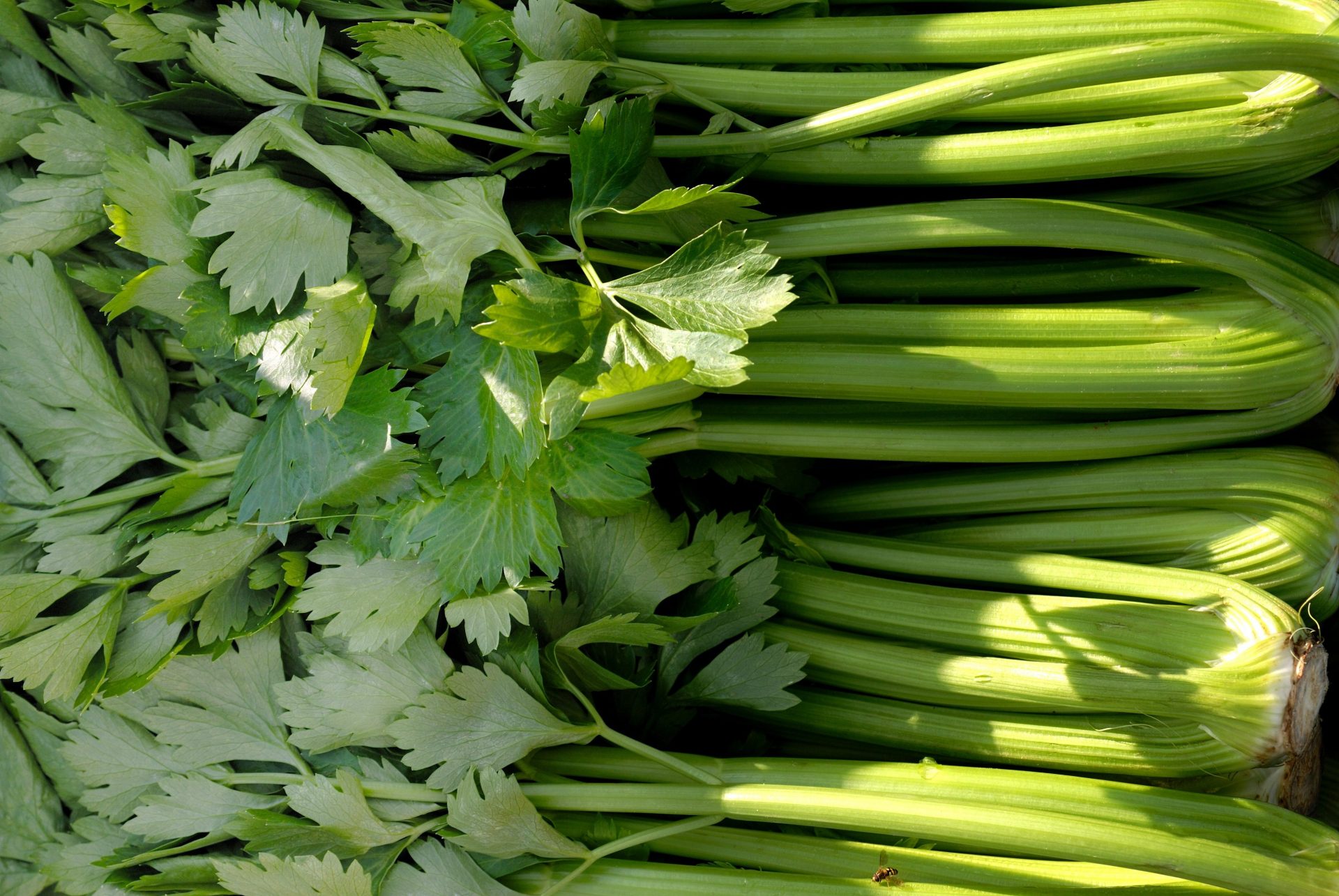 How to Use Celery Leaves

Celery is often eaten raw, cut into sticks. Because its fibrous strands can be tough, celery is often cut smaller or shaved thinly with a mandoline to add to salads raw. Both stalks and its leaves are commonly juiced. If purchasing celery to eat raw, you can retain the leaves and thick bases to add to soup stocks. And of course, you can make numerous soups and stews using celery chopped up along with carrots and other aromatics. Celery is often found as an addition to stuffing in the fall, such as for a Thanksgiving turkey.

Celery stalks and its leaves are rich in vitamins and minerals, and have numerous health benefits. The crunchy stalks are a good source of antioxidants, B-vitamins and phytochemicals while Vitamin A can be found in its leaves. Because of its many vitamins and minerals and refreshing water content, celery is a popular choice for juicing raw. As a natural diuretic, it’s advised that those with kidney ailments eat celery in moderation.