Dairy, Drought and the Drying of the American West

When most Americans think of U.S. dairy, they picture cows roaming on the verdant pastures of Wisconsin. But in reality, they should replace that image with the tawny fields of California, the largest dairy producing state.

California produces more milk and cheese than anywhere else, including Wisconsin, the second biggest producer. California is in the middle of a megadrought, and dairy cows need loads of water. Some of that water is for the animals to drink and wash, but most of the water consumed by dairy is connected to what cows eat, in the form of feed and forage. 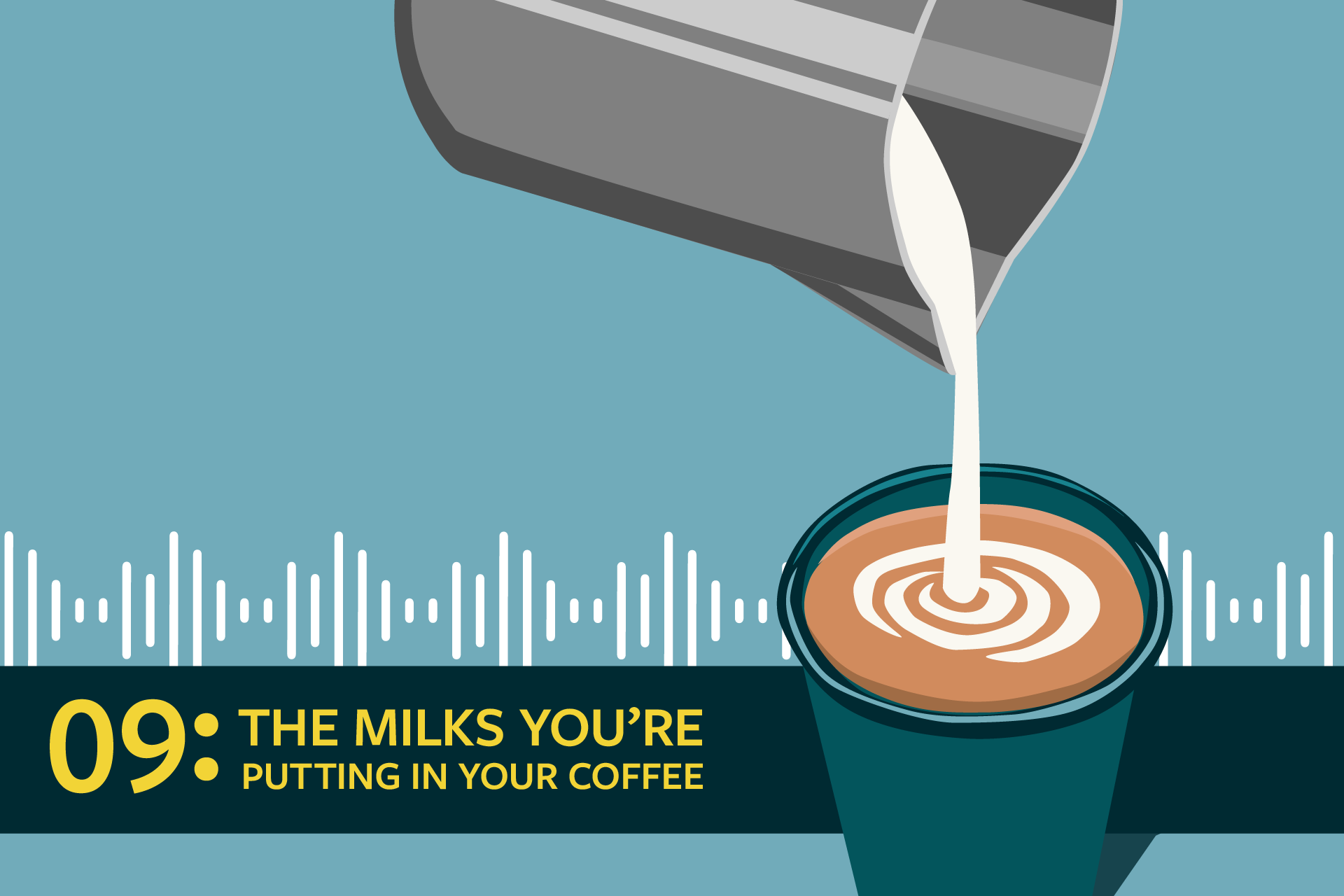 Our Podcast Episode on The Foodprint of Dairy

Much of the region is situated in arid or semi-arid lands, and with the effects of climate change it’s becoming drier and more susceptible to deep drought. The U.S. Southwest’s 22-year megadrought has been determined the driest in 1,200 years, and is contributing to the water crisis in the Colorado River Basin. With California the biggest agricultural producer in the arid West, it’s essential to understand what’s grown and fed to dairy cattle there, and the water required to grow that feed.

Fluid milk consumption has steadily declined over the past 50-plus years, yet domestic dairy production continues to increase, with cheese or yogurt more often the choice than a cold glass of milk. For U.S.-produced dairy, an eight-fluid ounce glass of milk has an average water footprint of 50 gallons (188 liters), while the more oft-consumed cheese has a water footprint of 119 gallons (450 liters) per four ounces. Whatever the dairy product, cow feed accounts for almost all of its water footprint. Since cows tend to have long lives and eat large quantities of grass, forage and formulated feed, the cumulative amount of water required to produce enough of any feed-type eaten by one cow is immense.

With water, it’s not just the amount that matters; the source and impacts of that water also contribute to a water footprint. For instance, water footprint data shows that the majority of water consumed for feed crops grown for U.S. dairy comes from rain and soil moisture (i.e., green water footprint), but as dairy and alfalfa production shift to Western states that are getting progressively drier, more irrigation is needed to grow those crops. This means a larger share of water withdrawn and consumed from streams, rivers and groundwater (i.e., blue water footprint). Over the decades, irrigated agriculture in the United States has soared, even though total water consumed through irrigation has dropped with gains in efficiency since 1995. This doesn’t account for other water impacts such as the potential for water pollution from dairies as manure washes into waterways and groundwater (i.e., grey water footprint).

The American West has many attributes that make it great for agriculture — fertile soil and a climate that provides plenty of sun for long growing seasons and fewer pests — but abundant water is not one of them.

Underscoring this point, a 2020 Nature Sustainability study on beef and dairy’s impact on water scarcity reveals that irrigation of feed crops for cattle is the largest water consumer, comprising 23 percent of all U.S. water consumption, 32 percent in the West and 55 percent in the Colorado River Basin. Moreover, almost all irrigated cattle feed was grown in the West. The authors, Richter et al., also found that, in addition to dominating water consumption, cattle-feed crop irrigation in the West imposes the greatest depletion on rivers during summer low flows and times of drought. These river flow reductions can create water shortages and threaten the survival of fish species.

Of the total irrigation water used to irrigate cattle feed, the Nature Sustainability study demonstrated that one-third went to dairy products (and the rest to beef products). In effect, eating cheese and drinking milk produced in the western U.S. typically means slurping up irrigation water taken from depleted water sources.

Chief among the cattle-feed grown throughout western U.S. and Colorado River Basin states is alfalfa, the fourth largest U.S. field crop by acreage. Not a grain but a legume, alfalfa is in many ways ideal for Western cultivation and as cattle feed delivered as hay. A perennial crop, alfalfa extends deep roots that fix nitrogen in the soil and is good in crop rotations because it minimizes the need for fertilizers. It’s fairly drought tolerant, easy to grow and can be harvested multiple times in the West’s warm climate. Although alfalfa is a relatively low-value economic crop compared to other perennial crops like almonds and grapes, it holds value because it’s always in demand, especially for dairy cows. More than 60 percent of alfalfa hay produced is fed to dairy cattle.

Despite its many good qualities, alfalfa’s water demands are massive. All told, alfalfa consumes more irrigation water than any other crop, just ahead of corn. As Western drought and aridification desiccate soils, shrink mountain snowpack runoff and reduce river flows, irrigating alfalfa for dairy production will become more and more problematic. Alfalfa has long been tagged as a profligate water user, and scrutiny of the crop is back in the news, for good reason.

Jonathan Thompson of High Country News has pointed out that alfalfa makes up half of the acres that farmers in the dry Western states are irrigating. He reported that the “Colorado River Basin’s largest single water consumer is the Imperial Irrigation District in Southern California… [where] About one-third of the district’s irrigated acreage is devoted to alfalfa, which annually consumes at least 400,000-acre feet of Colorado River water — more than Nevada’s entire allotment.”

Thompson also observes that Western alfalfa fields create what he cleverly calls an “anti-reservoir” that draws an inordinate volume of water from the Colorado River’s source – the high Rocky Mountain snowpack – and distributes it to beef and dairy cattle within the U.S. and abroad. (Alfalfa is a major U.S.-export crop, with seven Western states exporting almost 20 percent of their alfalfa in 2021 to such countries as China, Japan and Saudi Arabia.)

Keeping the Dairy System Afloat in the Dry West

The problem is that whether from the surface or below, water is dwindling. Can places with precarious water supplies continue to grow and irrigate feed crops for dairy cattle? California has been losing dairies over the recent decades for multiple reasons, including lower prices, stricter regulations, lack of land and, yes, lack of water. But where are many California dairies moving? To other water-scarce states such as Arizona and Texas.

What is water worth to the system? It makes sense for an individual farmer to use rather than lose water for cattle-feed crops. At this point, alfalfa or another animal feedstock is a valuable use of a farmer’s water because of guaranteed demand from industrial-style dairies that allow them to survive in times of uncertainty. But these individual, logical decisions can cumulatively harm the water system. For Western growers of alfalfa, hay and other cattle-feed crops now daunted by water shortages, options are available. There has been a move towards more water-efficient irrigation technology, which has benefits but can actually increase use. Federal and state governments are working on or have implemented plans in which farmers get paid to fallow fields, limit water for crops or switch to crops with smaller water footprints, all to conserve water. These and other strategies will undoubtedly happen and help.

But these Western water crises might also be a wake-up call for the intensive dairy system. The dairy industry writ large should probably be more widely distributed. If water shortages decrease feed crop and dairy production, that suggests that the entire dairy industry – from feed crop cultivation to cow-calf operations to dairies themselves – in California and other arid states might have to become smaller as they hit water limits.

Journalist Tom Philpott has argued that it probably makes sense for some of California’s agricultural production to be spread out across the country, and while he was talking about fruits and vegetables, it makes sense for alfalfa, too. Instead of the dry West doubling down on growing feed and raising dairy cattle, restoring more sustainable dairy operations in traditional dairy states, like Wisconsin and New York, with better water resource availability might be wise. This could also extend to the lower Mississippi River Basin states. To avoid falling further in Western water problems, the time to reassess how and where dairy is produced has arrived was yesterday.

Is it Possible to Decolonize the Wine Industry?