Mushrooms: they’re an iconic ingredient in beloved recipes like beef stroganoff and mushroom risotto, and vegetarians love them for their “meaty” flavor. Mushrooms offer so many reasons for us to love them, from the allure of finding the season’s first morels to the ease of cooking button mushrooms to the versatility of portobellos.

But so often a recipe calls for just mushroom caps, leaving the stems to land in the trash. And poorly stored mushrooms can turn slimy in a matter of days, meaning even mushroom tops are wasted all too often. Instead of falling into the mushroom trash trap, read our primer on how to shop for them, store them right, and cook with every part.

Mushrooms come in a wide variety of shapes, sizes, colors and flavors, and there is no one-size-fits-all approach to picking them out. Some — like button, portobello and shimeji mushrooms — are cultivated and regularly found at supermarkets and grocery stores. Others, like chanterelles and morels, are wild species, and you are more likely to find these at farmers’ markets and specialty grocers. (If you are hunting for your own, get our tips for foraging here.) While shopping advice depends on the type, in general, you want to look for fresh mushrooms without slimy, moldy or black spots. Here are some of the most popular varieties:

Button: The most commonly eaten mushroom, these come in either white or brown. These mushrooms are eaten both raw and cooked, and used in all sorts of applications, from pizza and salads to soups and tarts. Little known fact: button, cremini and portobello mushrooms are all the same variety! Button mushrooms are the youngest, cultivated for their white color and soft texture; next come creminis, which have a slightly more mature flavor and firmer texture; and then portobellos are the most mature mushroom, left to grow until their caps spread into their large familiar shapes.

Portobello: A large-cap mushroom, portobellos have a rich flavor and dense texture, making them great for grilling, roasting and/or stuffing. They are often used in sauces, served with pasta, or used as a meat substitute.

Shimeji: There are more than 20 varieties of shimeji mushrooms, but buna-shimeji are a popular choice thanks to their somewhat longer shelf life (they will last about 10 days in the fridge). Also called beech and brown clamshell mushrooms, they are grown and sold in clusters and should be individually cut from the base as needed. The caps and stems can be used interchangeably, and they are great used in stir-fries, soups, rice bowls and sauces.

Shiitake: These mushrooms are commonly grown in Japan, China and Korea, and are featured prominently in the cuisines of those countries. They have a richer, more savory flavor than buttons or portobellos, especially in their dried version (which can be rehydrated and used in place of fresh mushrooms for dishes like soup, braises and many of the other recipes below.).

Chanterelle: One of the most popular wild mushrooms, these yellow-orange trumpet-shaped mushrooms range from a fruity note to woodsy fragrance to spicy in flavor. They are delicate and work well when sauteed or fried.

Morel: Spotting morels at the market — or in the woods, if you’re a forager — signals the start of spring. The rare honeycomb-shaped mushroom is most likely to be foraged and found at the farmers’ market or a specialty market. Morels must be cooked — they are poisonous when raw — and are great simply sauteed in butter with salt and pepper. 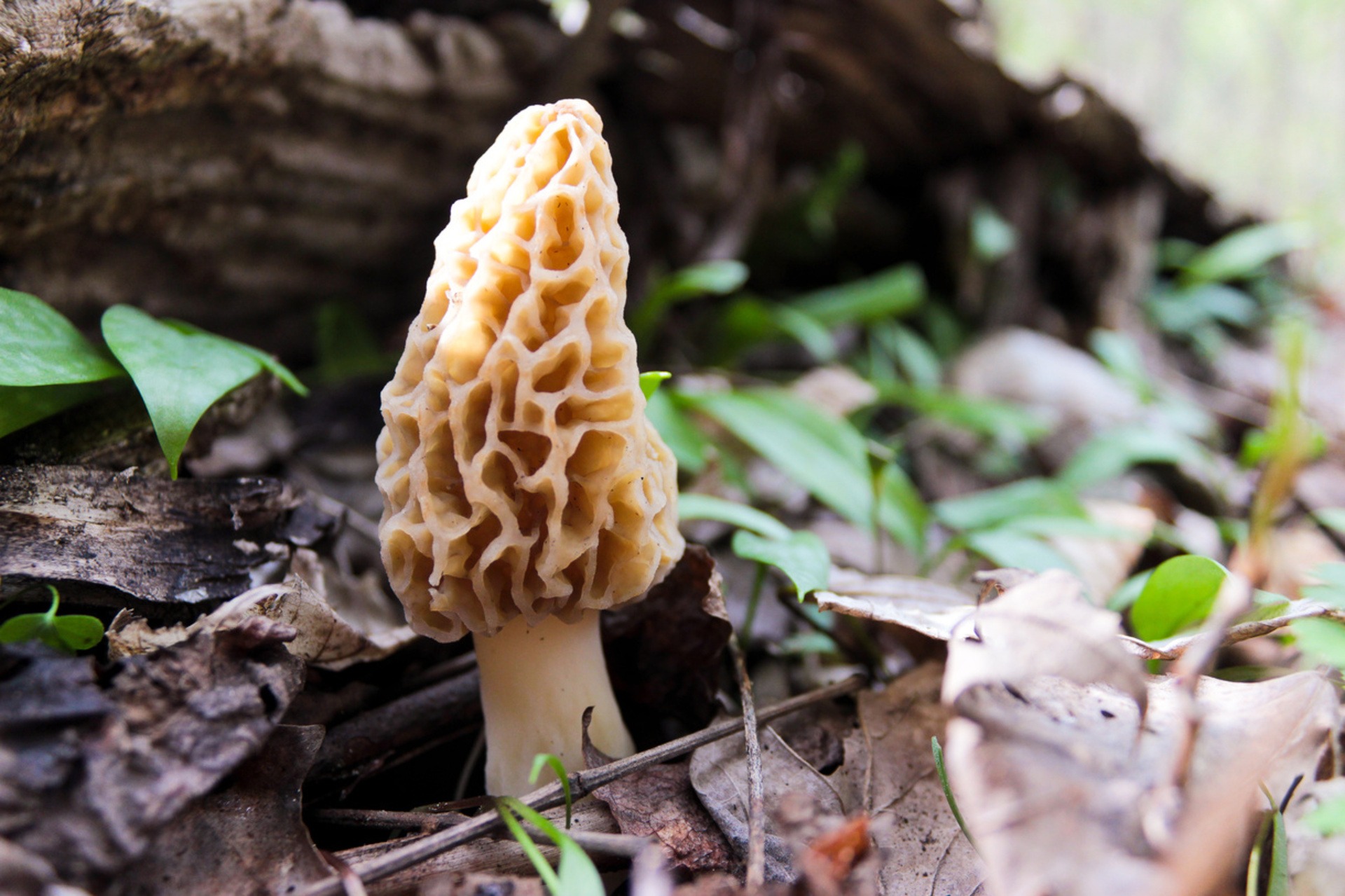 How to Store Mushrooms

Mushrooms don’t have a very long shelf life — they are best used quickly after purchased, so try to buy them close to when you plan to use them. If you buy (or forage) a lot, use the techniques at the end of this article to preserve them. Storing them properly can help extend their shelf life.

Store dry, unwashed mushrooms in a brown bag, the top folded over, in the main area of the refrigerator. Avoid storing them near foods with strong odors, as they will absorb some odors. The bag will help absorb excess moisture, and the main compartment is better than the crisper drawer, which is too moist.

How to Use Mushroom Pieces

Whether your recipe calls for trimmed mushrooms, leaving you with scraps, or you end up with some extra whole mushrooms lying around a few days too long, there are tons of ways to use up extra mushroom scraps and pieces. While some recipes — like salads and sautes — are better with fresh, raw mushrooms, other preparations break the fungi down into pastes, fillings or other mixings and are well suited for mushrooms that are slightly wilted. And many recipes advise you trim the mushroom cap from the stem, using the cap only. Well, don’t toss that stem! There are plenty of uses for it.

Use these applications for your trimmings, stems and mushrooms that are slightly past their prime.

This classic French preparation is made by sauteing a finely chopped mixture of mushrooms, mushroom stems, onion or shallots, and herbs such as thyme or parsley. The paste-like mixture is often used as a filling for savory tarts or for stuffing; it’s traditionally used to prepare Beef Wellington, but try it out for a mushroom Wellington instead. Because the mushrooms are chopped so finely, it’s okay to use scraps for this recipe, as well as mushrooms that are starting to wilt.

Another way to use a chopped mushroom filling is for savory tarts, strudels and pies. Mushrooms pair well with dairy and cheese, making them well suited for cheesy baked goods; try this mushroom pie with a parmesan crust; this strudel with a creme fraiche filling; or this Gruyere and mushroom tart.

While portobellos are often themselves stuffed, mushrooms can be used to stuff other foods as well. A duxelles-like mixture can be made with mushrooms only, or with a combination of mushrooms and chopped vegetables, to stuff peppers, tomatoes, zucchini and more.

Another easy way to use up mushroom pieces, scraps, slightly wilted mushrooms or mushrooms stems is with soup. Chop pieces and tender stems to add along with other vegetables for chunkier soups: use scraps, wilted mushrooms and tougher stems to make creamy soup. This update on the old-school cream of mushroom recipe adds homemade breadcrumbs as a topping for a crunchy finish.

Mushrooms are often used as a meat substitute thanks to their hearty flavor and chewy texture. Use them to make mushroom ragu (a classic Italian sauce usually made with beef, veal and/or pork), by simmering mushroom pieces and stems with tomatoes, garlic and mushroom broth (see below). Serve with pasta or polenta, or use as a spread on crostini.

One way to cut back on meat is subbing in half vegetables for recipes that call for ground beef, such as burgers, meatloaf and tacos. Thanks to their savory flavor, mushrooms are a popular choice. The next time you make burgers, add your mushrooms scraps to the mix to boost the umami flavor and add moisture to your patty.

For a crispy snack or crunchy addition into salads or pilaf, make Mark Bittman’s mushroom “bacon”. Although Bittman calls for shiitakes in this recipe (find it below), you can use those mushroom pieces and stems to make it; toss in spices, then roast until crispy for a smoky, chewy bite.

For a flavor-packed powder, cook pieces and stems in a low oven or dehydrator until dried. Process in a blender until turned into a fine powder, which can be added into soups, sauces, meatloaf, burgers, casseroles or other dishes for a boost of earthy flavor.

While you can certainly add those mushroom stems to your pile of veggie scraps for stock, you can also keep a collection of mushroom scraps in the freezer to make a mushroom concentrated broth. Add in some onion peels, garlic scraps and herb ends for additional flavor, then use the broth to make this barley and mushroom broth dish.

How to Preserve Mushrooms

Mushrooms freeze well, but it’s best to freeze them as soon as you buy them — before they have time to start deteriorating. If you purchase a big haul, set some aside to freeze. First, clean the mushrooms; then saute or steam them; and then place the cooked mushrooms in a single layer on a rimmed baking sheet in the freeze. Once they are frozen solid, pack mushrooms into a container with an airtight lid and freeze for up to one year.

If you don’t have a lot of freezer space, drying those extra mushrooms might be a better option. Dry them in a low-temp oven or dehydrator; dried mushrooms can be stored in an airtight container and rehydrates as needed. Dried mushrooms are great for adding even more flavor to a broth and rehydrating and adding into eggs, sauce and soup.

If you want to preserve your mushrooms, but also use them right away, pickling is a good option. Tossing them into a pickling liquid will help them keep in the fridge for up to a month, and they are great tossed into a salad, eggs or served as a side.

Mark Bittman, “Dinner for Everyone”

Cut into chunks: 4 carrots, 2 onions (don’t bother to peel), 2 all-purpose potatoes, and 2 celery stalks. Put them in a pot with 5 or 6 garlic cloves, a good-sized bunch of parsley, 3 quarts water, and some salt and pepper. (Add tomatoes or fresh or dried mushrooms if you’d like.) Bring to a boil, then adjust the heat so the mixture bubbles gently. Cook until the vegetables are tender, about 30 minutes. Strain the stock through a fine-mesh sieve, pressing on the vegetables to extract as much liquid as possible. Discard the solids. Cool to room temperature, then refrigerate for up to 1 week or freeze for up to 6 months. Makes 2 quarts stock in 1 hour.