Eat Seasonally This Winter With Radicchio

Like most children, Lane Selman didn’t like the bitter bite of radicchio growing up. “I’m from Florida originally, and it’s not popular in Florida at all,” she says. “My mother ate a lot of radicchio, with cranberries and walnuts, but I was always like ‘What is this thing?’ I didn’t eat it.”

Today Selman, an agricultural researcher at Oregon State University and Director of the Culinary Breeding Network, is a bonafide radicchio cheerleader. Part of her work includes identifying ideal varieties of vegetables for the region, including radicchio, and as co-founder of Sagra del Radicchio, an annual radicchio festival, Selman is often found praising the oft-overlooked winter vegetable. “It brings joy to my life: to make salads with it and bring color into this time when it’s kind of dreary. Even looking in my garden, I have several rows of the pink radicchio and it’s beautiful,” she says. 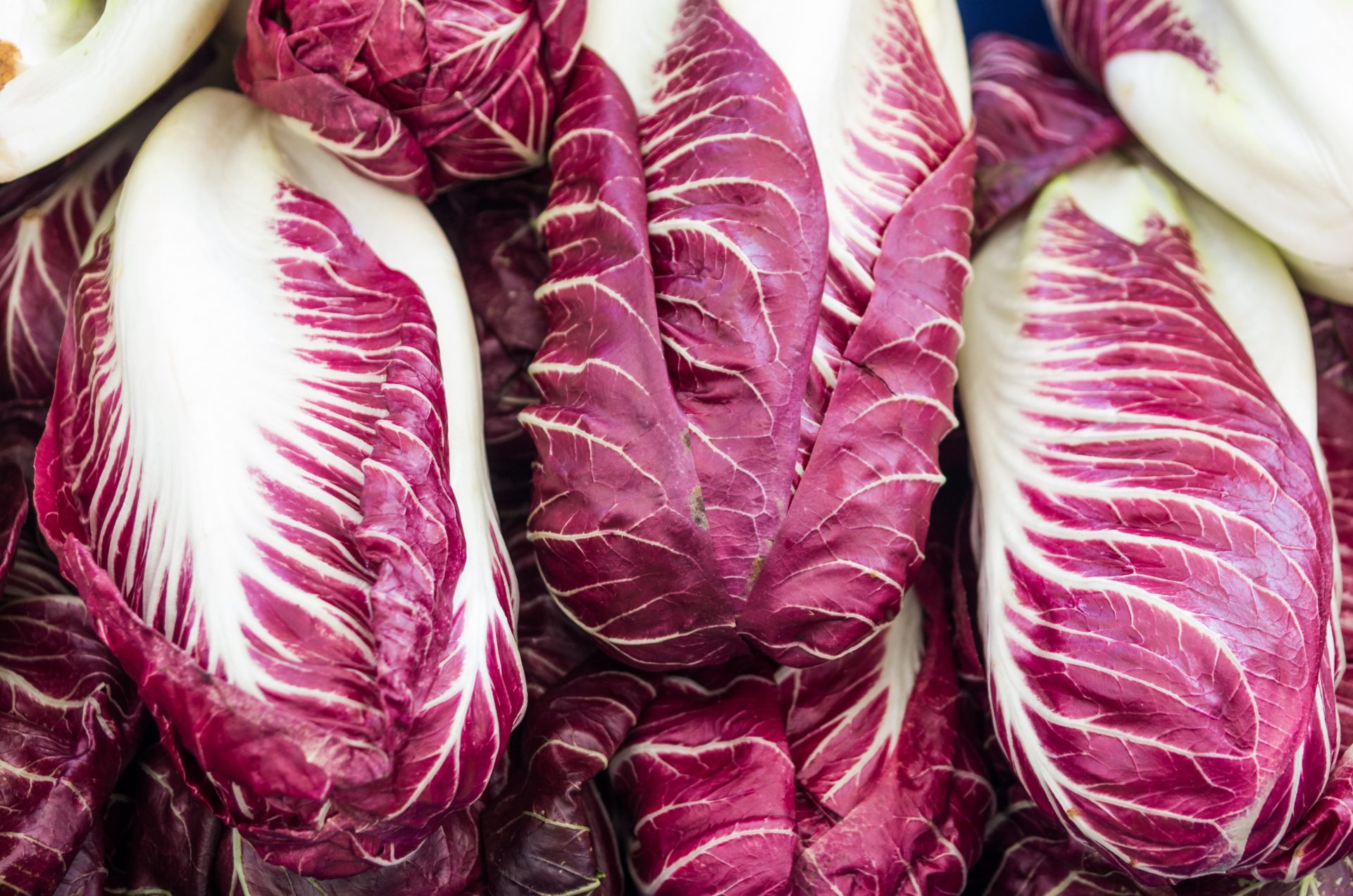 For many farmers in colder climates, winter farming either means hardy crops that can withstand the cold, such as kale and other brassicas, or greenhouse growing, which can be resource-intensive and is used to grow ingredients out of season. And many shoppers, even farmers’ market regulars, retreat to the convenience of grocery store produce when the cold weather hits. “As soon as it starts raining, and there’s just a lot of roots at the market, [shoppers] kind of don’t go to the market anymore,” says Selman. “They go to the grocery store and back to buying whatever lettuce and cucumbers that are out of season and brought in from somewhere else.”

A key reason Selman devotes her energy to promoting radicchio, in her research at Oregon State and through grant-funded projects like the Eat Winter Vegetables campaign and Chicory Week, is its seasonality. “My whole goal is supporting farmers to be able to grow and sell things all year round,” she says. “We promote these vegetables because we want people to be more excited about winter vegetables.”

Unlike greenhouse-grown lettuces or vegetables that are shipped from around the world to the grocery stores, radicchio can be grown, with very few inputs, in the cool climates of the Northeast and Pacific Northwest from September through March. As Jason Salvo, who runs Washington’s Local Roots Farm and co-founded Chicory Week, told Heated, “If people can get a radicchio salad, a local salad in January … we’re not trucking up romaine from the Imperial Valley, we’re keeping our dollars local, so we’re building our local economy.” If you’re in cooler regions where radicchio thrives, choosing it over lettuces during the winter is choosing local, supporting small farmers and promoting seasonal eating.

For the general American palate, which prefers more mild tastes, radicchio isn’t an appealing flavor. A member of the chicory family (which also includes frisee, Belgian endive, and dandelion greens), it’s most often described as bitter. And only one variety of radicchio is typically seen in US grocery stores: the red, ball-shaped Chioggia, which has crunchy, bitter leaves that are often confused for cabbage.

Selman, Salvo and others are working to educate consumers about the many other varieties of radicchio with Chicory Week and other events. More inviting and less bitter varieties include the light pink Rosa del Veneto, the green and purple speckled Castelfranco radicchio, and the Treviso Tardivo radicchio, with its squid-like leaves. “I think the really cool Italian heirloom-y varietals [of chicories] are the most fun, because they’re pretty. We don’t see them very often,” says Jenn Louis, a Portland-based chef and author of “The Book of Greens.” “And they are really cool. Some are speckled green and white, some are dark red.” And while these niche varieties might be less common in US grocery stores, they are becoming more popular among small farmers and are showing up at farmers’ markets in cooler regions.

Bringing Italian Technique and Knowledge to The US

If there are such beautiful and delicious varieties of radicchio, then why is Chiogga, a bitter variety that hasn’t exactly won radicchio a huge following, the only one generally available in the United States? You might think one could simply pick up seeds for other radicchio varieties from the local garden store and grow your own. Radicchio, however, is native to the Veneto region of Italy  — Pliny the Elder mentions it in his book “Naturalis Historia,” published in AD 77 — and up until recently most of the cool weather crop sold in the US was either Chioggia grown in California or other varieties exported from Italy. Purchasing seeds, unless at a very large quantity, was not possible, and information about seeding, harvesting and storage was sparse and rarely in English.

As farms like California’s J Marchini Farms began growing radicchio in the 1980s, the chicory became known as the pop of color in bagged salad mixes. Salvo’s Local Roots Farm and Pennsylvania’s Campo Rosso are among the handful that began growing more unique varieties in the past decade. The vegetable is notoriously difficult to grow; some varieties, like Treviso Tardivo, are grown in the dark to delay maturing, others depend on getting the planting and harvest dates just right. “All the people that really understand how to grow radicchio well have gone to Italy… to visit farms and they get information that way. We would like to bring that information here for farmers to understand [how to grow radicchio better],” says Selman.

Through the Culinary Breeding Network, Selman has arranged two trips to Italy, in 2014 and January 2020, to bridge connections between farmers and breeders, and to document the methods used for each variety. She also recently helped start a collaboration between an Italian seed breeder and the Washington-based seed company Uprising Seeds, who will sell seeds for radicchio varieties as well as brassicas that are specific to Northeast Italy. “They will be selling [these Italian] seeds for the first time in the US market,” Selman says. “It’s really high-quality seed and it’s exciting to be able to connect so directly to the breeder. Now, even gardeners will be able to get small packages.” With another recently funded grant, she has several additional research trips to Italy planned, pending COVID-19 travel restrictions.

As these unique varieties become more readily available, more and more people are taking note of radicchio’s flair. The vegetable ended up on the cover of Bon Appetit’s February 2021 issue, and articles proclaiming its trendiness have recently graced The Wall Street Journal and Food & Wine magazine. The hashtag #radicchio has been used on Instagram more than 160,000 times, where the pretty pink leaves of the Rosa variety often pose like models. Along with the Sagra del Radicchio and Chicory Week, other cities have started radicchio festivals, including Vancouver’s Radicchio Festival.

As food writer Leah Koenig writes in Taste, part of the uptick in radicchio interest stems from the broadening American palate. “Radicchio’s rise happens to synchronize perfectly with a moment when American consumers are slowly coming around to more challenging flavors — flavors with funky, sour, and spicy profiles,” Koenig writes. “That openness now extends to the bitter flavors that we taste in things like hoppy IPAs, intensely dark chocolate, turmeric, and tahini.”

The farmers dedicated to growing and promoting the vegetable have also seen an uptick in the market. Selman compiled data as part of a recent grant application for continued radicchio research, citing numerous growers who had seen demand increase exponentially over the past few years. Farms like Western Massachusetts’ Kitchen Garden Farm, which sells directly to stores in New York City, Boston, and Providence, and Local Roots Farm saw radicchio sales double in the past year. “Only carrots and lettuce exceed radicchio in terms of total dollars per year,” Local Root’s Salvo writes on the Chicory Week website. “Year-round sales are important to our business and employees. Winter sales improve our cash flow, profitability and our ability to retain employees.”

Developing A Taste for Radicchio

Although some consumers are becoming hip to radicchio’s flavors, thanks to the work of ambassadors like Selman and farmers like Salvo, the vegetable still remains a bitter conundrum for many. “We also really need to educate them about how to prepare it, because people are not that excited about the challenge with the different flavors, right?” says Selman. “I mean they’re earthy, they’re bitter, they are not sweet and bright like the things that you eat other times of the year.”

At their annual festival (which was held virtually this year), Selman and her team introduced attendees to radicchio, many for the first time. If you’re just trying it, Louis has a few suggestions for tamping down the bitter flavor. First off, when using radicchio leaves raw, she suggests soaking them in ice water for at least 30 minutes, which will help crisp up the leaves, and also lessen some of the bitterness. (Make sure to spin it in a salad spinner before using to remove some of the water.)

From there, it’s all about balance. “Try using something that may be a little fatty and creamy,” she says. “So think about a Caesar salad, because you have that rich, kind of fatty dressing to kind of calm down some of the bitterness of the radicchio.” It’s also common to pair raw radicchio with citrus, nuts, and good aged balsamic vinegar and olive oil.

As for cooking, some of the longer leaves of radicchio, such as Treviso, with its dense, football-shaped head, can be grilled. “You can use them almost like a grilled romaine, that’s pretty fun,” says Louis. And even in cooking, thinking about balance is a good idea with radicchio. In her “Book of Greens” cookbook, Louis combines the rich creamy flavor of creme fraiche and parmigiano with radicchio as a stuffing for her salt-roasted potatoes.

But with radicchio, it’s really about embracing the bitter, at least to some extent. “It’s always gonna be a little bitter,” says Selman. “One of the farmers I work with here, he’s been selecting for so long to have the littlest amount of bitterness that I don’t actually like it. It doesn’t taste the way it’s supposed to taste, because I like a little bit of that sharp bitterness.”

A couple of recipes in this book call for just half a head of radicchio. These cute little potatoes make a great use of that other half. Though tiny, these potatoes are rich, the perfect balance for the bitterness of the radicchio. They are easy and quick to make, and they look really spiffy because of the melted cheese on top. They are the perfect accompaniment to a steak, and they make nice little hors d’oeuvres, too.

NOTE: You will have 1⁄2 head radicchio left from this recipe. Eat it as a side dish with steak or use it to make the hand pies on page 95 or substitute for chickweed in arepas (page 85).

This is the classic salad that introduced (and then hooked) at least a decade’s worth of Portlander’s to radicchio. It was created by chef Cathy Whims of Nostrana and is still one of our favorites. It is wonderful with the Rosso di Verona, but any radicchio will do. Try it as a bed for a roast chicken.