When the FoodPrint team started to think about creating our new podcast, “What You’re Eating,” we took inspiration from our favorite podcasts, the ones shedding a light on the inner workings of the food system and exploring food culture. And there are so many great ones to choose from right now. As Taste Magazine recently put it, “This cinematic style of audio storytelling is one of many diverse approaches to the modern food podcast — a quieter, though quickly growing, category of untapped potential within the explosive world of audio entertainment.” As a group, we regularly talked about shows telling stories in this way: Fair World Project’s podcast “For a Better World,” about fair trade and farmer and worker-led movements fighting for equitable food and farming systems. Or “Gastropod,” about the science and history of food. Or Samin Nosrat’s “Home Cooking.” Or The Kitchen Sisters’ food-centered stories that explore how communities come together through food.  We love so many of Heritage Radio Network’s impressive line-up of shows, including “The Farm Report” and “Why We Eat What We Eat.” 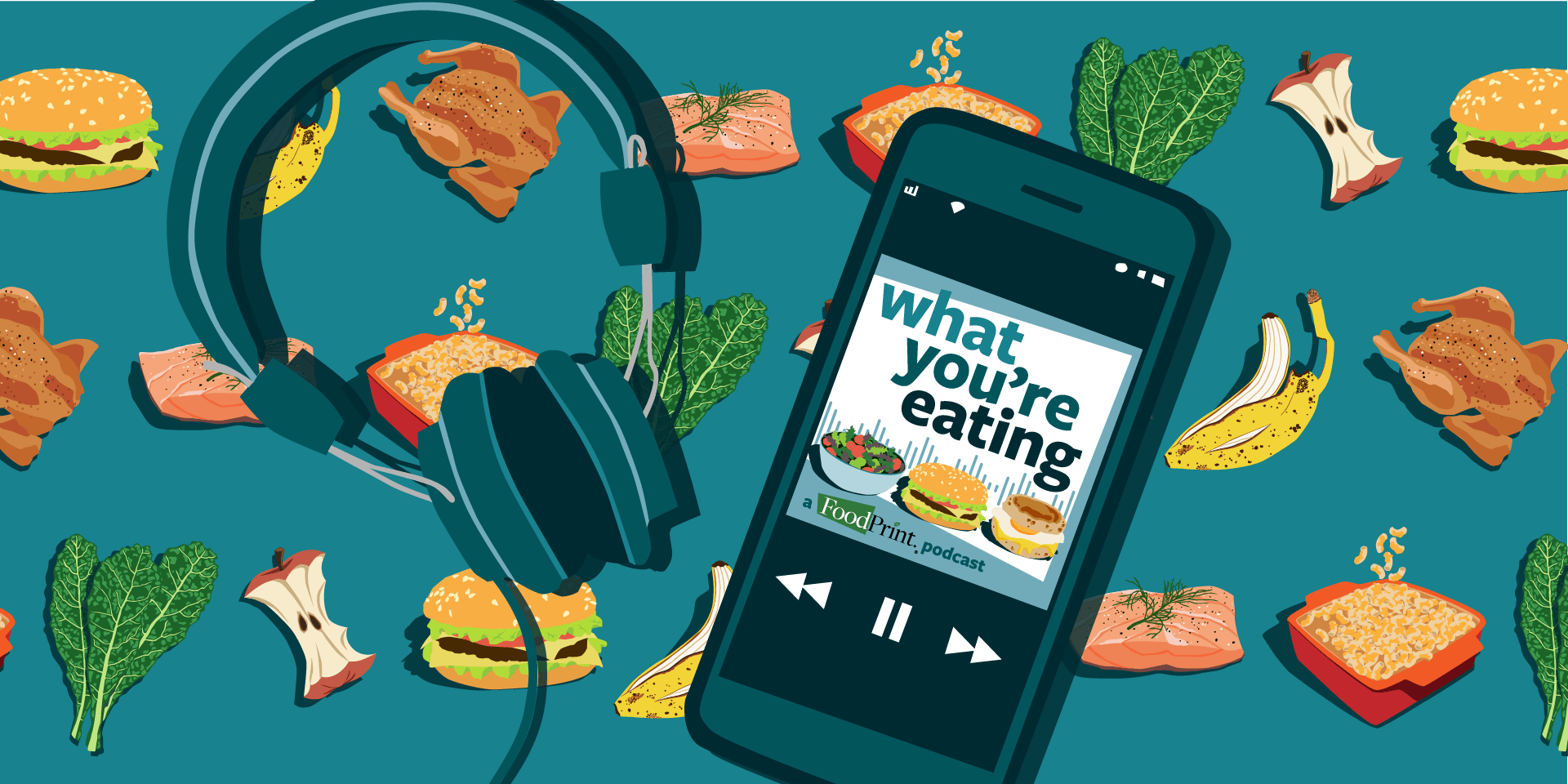 Listen to "What You’re Eating"

Some of our favorite newcomers come from Whetstone Radio Collective (WRC), an offshoot of Whetstone Magazine, founded by Stephen Satterfield, author, media entrepreneur and host of Netflix’s High on the Hog. First published in 2017, the magazine was Satterfield’s grassroots effort to take food publishing into his own hands, diving into global food cultures, focusing on culinary anthropology, food origins and showcasing diverse storytelling. “It is essential that Black people own their own media because when we don’t own our own media, we will not own our own messages,” he told Mother Jones in 2020. “And that is catastrophic, not just for Black people, but for all marginalized communities.”

With WRC, Satterfield turns from printed paper to radio waves, giving the mic to hosts around the world and bringing the stories alive through audio. “I’ve always been a fan of public radio,” he says. “I love the format of drive time programming and the intimacy of the medium. One of my best friends, Franklin Clary, was an audio engineer. He made me reimagine what was possible with the medium.”

Although Whetstone initially produced a three-season collaboration with iHeartRadio, “Point of Origin,” they only recently launched their radio collective, starting in December 2021 with “Climate Cuisine,” a look at how ingredients are grown and used in similar climate zones around the world and across cultures. With nine additional shows planned (seven of which have already launched), these podcasts offer a multitude of global viewpoints on food, from “Bad Table Manners,” hosted by Delhi-based anthropologist Meher Varma to “El Corredor del Néctar,” a Spanish-language show about mezcal.

Although each show seems to be a direct offshoot of the vision and viewpoint of Whetstone’s brand, creating a library of materials has been a case in discovery for Satterfield and the Whetstone team. “I think to some degree they choose themselves,” says Satterfield, when discussing how WRC and the series developed. “We have done a good job of outlining an editorial philosophy or maybe just a vibe. But people get it and the pitches we received are for the most part a reflection of the genius of our community.”

If you like the content on FoodPrint and our new podcast “What You’re Eating,” we think you’ll also be fans of WRC and their widespread culinary and cultural reporting. Here are a few of our recommendations to get you started:

American Tawainese journalist Clarisa Wei reports this investigative look at staple crops grown in similar climate zones globally, discussing how they are grown, prepared and eaten around the world. In “Climate Cuisine,” Wei talks with soil scientists, chefs, researchers and writers (including our own Ryan Nebeker in episode 2 on taro) to discuss how the increasing impact of climate change will affect these crops, which many communities depend on. As Satterfield describes it: “‘Climate Cuisine’ is not only entertaining, I think of it as service journalism. We need to make more clear the connection between our diet and our climate and the show does it brilliantly.”

Start With: Why All the Bananas at the Grocery Store Taste the Same

Atlanta chef and cookbook author Jessamine Starr hosts the quirky podcast “Fruit Love Letters,” inspired by her lifetime love of all fruits. Making use of her literature degree, Starr pens love letters to her favorite fruit — a different one each episode — and then dives into learning more about them. Satterfield describes the podcast as “gorgeous,” “smart and thoughtful” and “a delightful lesson.” Through conversations with chefs, farmers, scientists and fellow enthusiasts, listeners can discover more than they ever knew possible about the fruit in their refrigerator, from the apple and fig to blueberry, avocado pit and more.

Start With: The Improbable Path of the Avocado Pit

Hosted by Anishinaabe seed keeper and community organizer Shiloh Maples, “Spirit Plate” honors the Indigenous communities across Turtle Island (North America). In interviews with seed keepers, chefs, farmers and Indigenous community members, Maples looks at the social, political and historical elements of the Indigenous food sovereignty movement, and gives examples of the work being done to preserve and revitalize ancestral foodways. For Satterfield, “Spirit Plate is grounding, stirring and revelatory. It is a necessary confrontation of the persistent erasure of Indigenous American narratives.”

Start With: A Landscape of Relations with Rowen White

The most recent series to launch, “Setting the Table” focuses on African American culinary traditions, tackling The Great Migration and how cuisine traveled across America, farmland ownership, food and civil rights and the future of Black food. Hosted by Virginia-based food writer Debra Freeman, it showcases how African Americans have shaped the culinary landscape of this country, by exploring historical events and looking at the Black authors, chefs and other influencers moving the culinary narrative forward. “It’s a conversation with people who are deeply invested and deeply passionate about these topics,” Freeman told the website Southern Kitchen.

Start With: The Great Migration and Black Food