While most Americans think of turkey as the center of the Thanksgiving table, the bird was hunted and domesticated by Indigenous people long before the arrival of European colonizers. In the American colonies, the bird was introduced to settlers by the Wampanoag people.

Turkey may have appeared at the first Thanksgiving alongside with other wild fowl and game like duck, geese and deer, but it didn’t become a staple on holiday tables until much later.  By the mid-1900’s, home ovens became a staple of the modern home, allowing the tradition to become entrenched across the country.

And now, eating the bird throughout the year — not just on Thanksgiving — is on the rise in the US. Turkey consumption has increased nearly 110 percent since 1970, with the top products being whole birds, ground turkey and breast deli meat. It is the #4 protein choice behind chicken, beef and pork. Modern domesticated turkeys look little like their wild relatives, and mass production comes with a number of trade-offs for animal welfare, the environment and flavor. But heritage birds, which are often raised on pasture, are important for preserving biodiversity and culinary tradition. 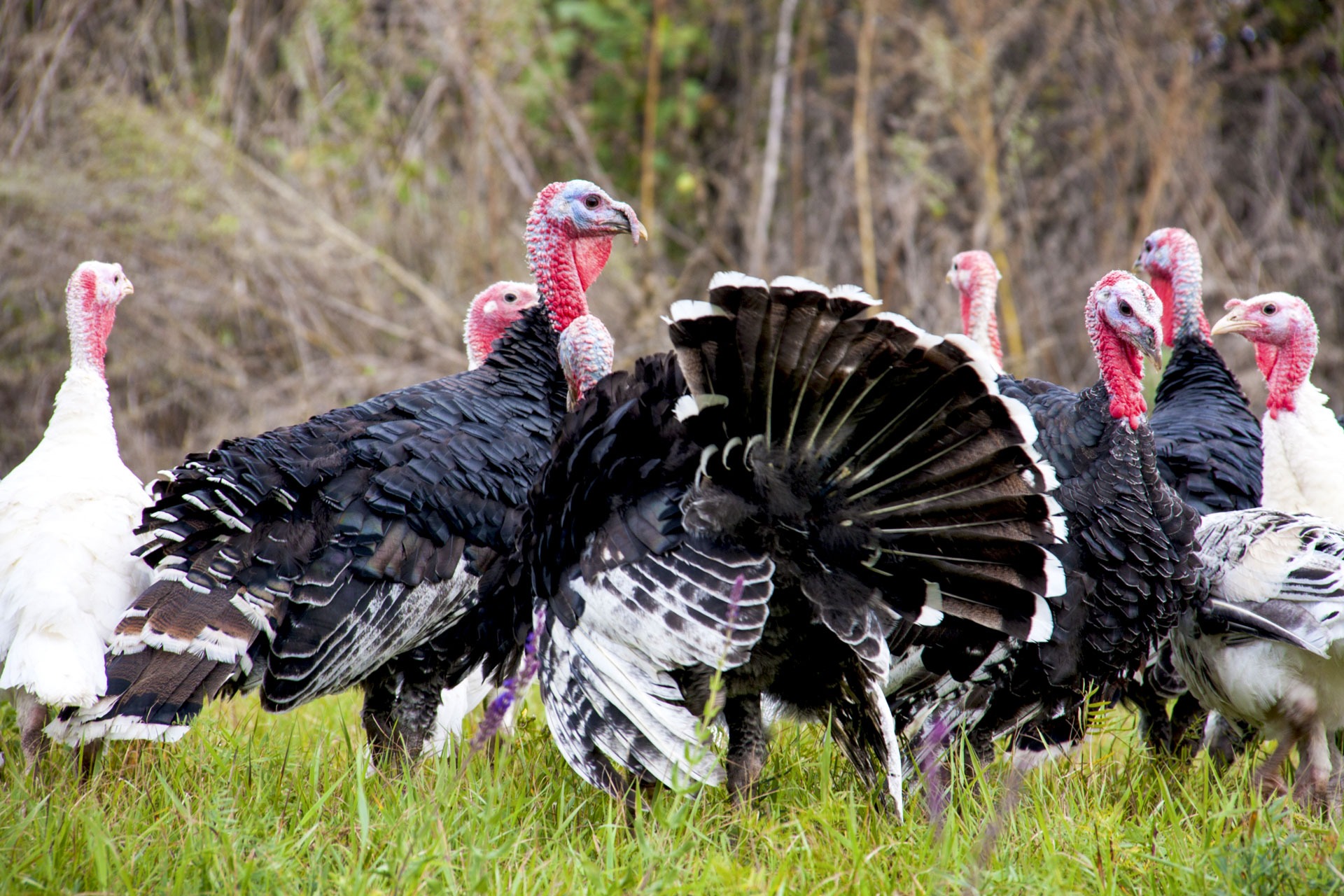 Your Guide to Buying and Cooking a Heritage Turkey for Thanksgiving

What to Look for When Buying Turkey

For as much turkey as Americans eat today, it can often be a dry and flavorless meat.  Today’s birds have been bred for large breasts, plentiful white meat that can feed a big Thanksgiving table or be made into other foods. White meat turkey’s leanness is what makes it popular as a substitute for fattier meats. Ground turkey is commonly substituted for beef or pork in hamburgers and sausages, and the sliced meat is served in sandwiches instead of ham.

This lean protein comes with challenges, though: many find its breast meat becomes too dry when roasting a whole bird. This has prompted a slew of recipes and tips for brining turkeys, which keeps the breast meat moist.

There are a few ways to solve this problem. Consider buying a smaller turkey, since it will be able to cook more quickly and evenly. Heritage breeds, older varieties that are bred for flavor rather than maximum productivity, often  have more dark, succulent, and naturally moist and flavorful meat.

Turkeys have traditionally played a harmonious part in small, integrated farms: they provide protein through eggs and meat, their waste provides nutrients for soil, and they will eat bugs, grass, weeds and kitchen scraps.

But today, most turkeys carry a much larger foodprint: much like chicken, the vast majority of turkeys today are raised in indoor concentrated animal feeding operations (CAFOs, or factory farms), which have enormous environmental impacts.

CAFO-raised birds are typically fed corn-based feed. 89 percent of corn grown in the US is genetically engineered, and most of this corn goes towards feeding livestock. While GMO crops don’t have negative health impacts on animals or people, the traits they give plants — like herbicide resistance — mean that farmers end up using far more of environmentally damaging chemicals like glyphosate. Overuse of these chemicals then accelerates the evolution of herbicide-resistant “superweeds” that farmers try to control with increasingly toxic chemicals.

CAFOs are also bad for animal welfare: to ensure profitability and lower expenses, hundreds of turkeys are crowded into poultry sheds with no access to the outdoors. The birds’ beaks are clipped, and the filthy, crowded conditions cause disease in the animals.

Birds are bred to reach maturity quickly, so they encounter serious physical problems, like reduced immunity to disease, skeletal deformities and heart problems. As larger birds, turkeys are more prone to infection than other poultry. To prevent disease in crowded conditions, turkey farmers use antibiotics, many of which are also used in human medicine. This can increase the risk of antibiotic-resistant bacteria that hurt people and animals.  In 2019, ten percent of the medically-important antibiotics used in the food system were used on turkeys, despite turkeys making up a much smaller fraction of the livestock in the country.

Poultry CAFOs are also a big polluter: they generate an enormous amount of waste concentrated in one place, causing water pollution, toxic algae blooms and ammonia fumes that cause human health concerns while making rural communities unpleasant to live in.

Like other meats, turkeys can be water-intensive to produce: one pound of turkey represents 491 gallons of water. That’s 93 gallons per three-ounce serving. 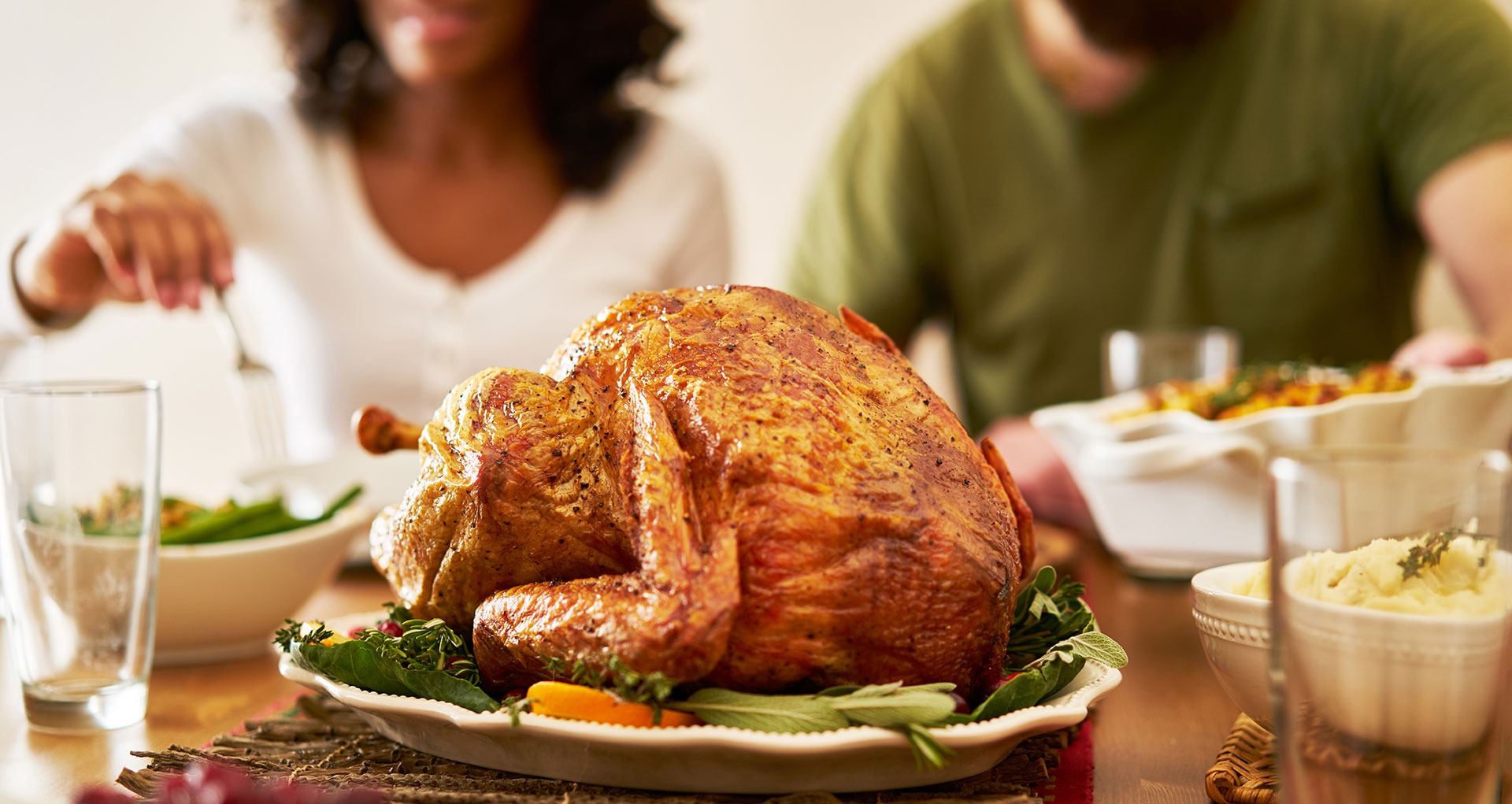 Americans eat roughly 46 million turkeys on Thanksgiving, about 17 percent of all turkeys produced in the year. Many producers raise the birds year-round and sell them frozen for the holiday, too. Needless to say, the industry is extremely busy in late autumn; in order to get turkeys into stores the week of Thanksgiving, most birds are slaughtered and shipped out to retail outlets the same day, during late October and early November. To prevent overage and waste and to ensure you have a turkey on your table, many stores and farms appreciate it when you place an order for your bird a few weeks ahead of time. This is especially important if you’re trying to find a heritage bird, since producers have a limited number of turkeys available.

Breeding for specific qualities in turkeys — namely, more white breast meat in proportion to dark meat — has led to the extinction of numerous types of turkeys, the few remaining of which are now called “heritage breeds.” Since the 1960s, this selective breeding of commercial turkeys has resulted in 99 percent of all domestic turkeys today being of the breed called Broad-Breasted Whites. (Incidentally, hormones are not approved for use in turkeys in the US, so turkey labeled “hormone-free” is just a marketing gimmick.)

Losing heritage turkey breeds isn’t just a matter of taste or preference, though; biodiversity helps ensure healthier animals because they aren’t bred from a smaller pool of genes, making them less vulnerable to disease. That’s why there have been efforts from non-profit organizations as well as determined small farmers who are still raising heritage turkey breeds to keep the strains alive. Since purchasing them for food is one way to support these farms (and the survival of heritage birds), heritage breeds have been making a comeback in recent years, even though they only amount to a small fraction of total turkey production.

Experts advise to store leftover cooked turkey in a refrigerator of 40 degrees Fahrenheit or below for no longer than three to four days. The storage time of fresh turkey greatly depends on its point-of-purchase date and its slaughter date. There are expiration dates on most commercial turkey products purchased in the US, but exposure to warmer temperatures or improper handling may corrupt the sell-by dates shown on packages. The best way to know whether your turkey is fresh is by its smell, color and texture; fresher turkeys should have no off-smell and will not have any sticky residue on their surface. 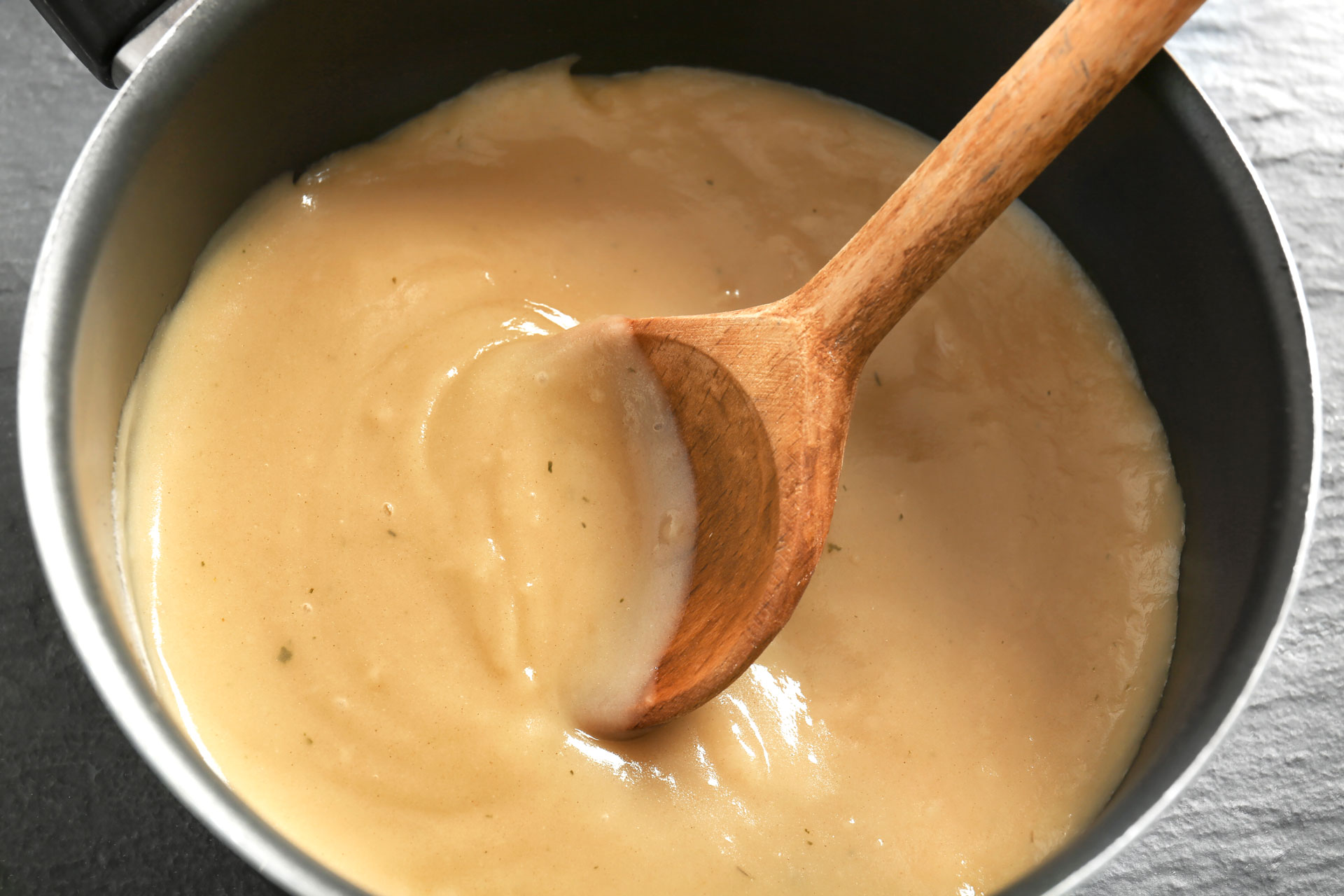 How to Use Giblets

Americans associate turkey most strongly with Thanksgiving, and while that may be the day they eat the most of it, it’s far from the only time turkey is consumed. Long before European colonists arrived in the Americas, turkey was domesticated in Central America and eaten by Indigenous people across the continent.  It still features in Mexican cuisine, and is particularly popular in the Yucatan peninsula. It’s also an important part of Indigenous Americans’ foodways today, and appears in both traditional and modernized recipes.

Turkey is a popular meat worldwide, and different cultures make different uses of the birds: turkey tails, originally imported as a byproduct from American processing plants, are particularly popular in American Samoa, for instance.

Roasting an entire bird is the most popular way to prepare turkey for the holidays. While many people are intimidated by the prospect, selecting a better bird and following a few basic tips — like adequately thawing the meat, not overcrowding the oven and effectively seasoning — can ensure a good result.  Outside of the holiday season, whole birds are less popular than other preparations in the US. Turkey breasts can be purchased individually for roasting, and legs make an impressive, rich main course at other times of the year. Ground turkey meat has found its way into American staples like meatballs, meatloaf and is frequently sliced into deli meat.

If you have a lot of extra scraps from roasting a whole turkey, don’t let it go to waste! Breasts can be used to make excellent sandwiches, and dark meat can be pulled apart into delicious stews, gumbos or even made into a pulled pork-style sandwich, too.

Like chicken, turkey is relatively low-fat animal protein. This is largely due to its disproportionate amount of lean white meat. Commercial turkeys today are high in protein and low in cholesterol, but whole turkeys often have added preservatives so they can maintain moisture in storage and transportation. Processed turkey products like deli slices can also be high in sodium. If you’re avoiding extra preservatives, try to buy turkey that comes from local producers at your nearest farmers’ market or seek out an organic turkey.