5+ Eco-Friendly Tips for Cooking for One

If eating alone was once something to be done in in secret, today this is rarely the case. Recent statistics show more Americans are living alone for longer, which means cooking for one is our new normal. More than that, it’s also now considered a form of self-care; a way to celebrate ourselves and all the benefits of being alone, though not lonely.

But solo cooks can find that cooking for one requires a whole different kind of planning to maximize savings and reduce waste, especially in a world geared towards families. How to budget for meals when you can safely assume you’ll be sold more than you need? How to work with vegetables that seem to go bad on their own schedule? How to play catch-up when there are leftovers in the fridge alongside new perishable ingredients? Learn More About How We Waste from Field to Fork

In the US, the average person wastes 238 pounds of food per year (21 percent of the food they buy), costing them $1,800 per year. It’s not just a waste of the resources that went into producing that food; food waste is a major emitter of methane, a potent greenhouse gas.

Here are tips for cooking for one without sacrificing quality, taste or enjoyment in the kitchen:

Where to Shop and What To Buy

When confronted with the temping rainbow of produce that greets us at the door of every supermarket, it can be easy to overbuy and overspend – and that isn’t just a solo cook’s problem. Thankfully (and not coincidentally), many of the supermarkets that work best for the solo cook are already built to address issues of waste: places like health food stores that offer grains in bulk or allow you to grind your own nut butters, or the trendy “zero-waste” grocery stores that sell loose products and expect you to bring your own bags and containers.

Even if you’re a greenmarket fanatic, try to limit yourself to one visit a week. Keep weekday meals simple and stock your pantry with nuts and spices. That way, any produce you pick up can quickly be whipped into something inspiring without having to buy a whole host of new ingredients. If you want to sign up for a CSA, be mindful of the work involved to process what can often be an intimidating bulk of fresh veggies, even for an entire family. Request a half share or partner with a friend or neighbor to split the bounty.

Also something to consider when it comes to CSAs: They offer several eco benefits on the supply side. As Sonya Gropman, long-time coordinator of a CSA in New York City, explains: “At the greenmarket, [farmers] do not have any guarantee of how much they are going to sell, so they could leave at the end of the day with a lot of leftovers. CSA farms grow a huge variety of crops because they have to hedge their bets.”

A farmer selling at a greenmarket may also be responding to market forces that dictate what fruits and vegetables are popular right now, whereas a CSA farmer with a guaranteed income at the end of the season may feel less pressure to please. That could mean more crop rotation, growing vegetables that require less water, and growing plants that are better for the land, all of which result in eco-friendly practices that may be invisible to the average shopper.

Prepping Tips for Cooking for One

That said, dining well while dining solo does require quite a bit of planning. Using up every scrap can only work if your food is kept fresh enough that you’ll be able to take advantage of it over several days, not just a single evening. “I’ll wash and spin lettuce or salad greens and then leave them in the fridge in the salad spinner,” suggested Gropman, who is also a co-author of “The German-Jewish Cookbook.” “I find it useful to pre-cook stuff so it’s ready to use in different ways: boiling potatoes and roasting vegetables in the oven.”

Dr. Julia Skinner takes a different approach with her fermentation and food history company Root, inspired by different preparation methods that date back decades or even centuries, which are increasingly regaining popularity. These are methods like canning and jarring, as well as pickling and fermenting, that can extend the life of fresh fruits and vegetables tenfold. “It wasn’t until I began my research as a food historian that it all clicked,” she writes. “Learning about the history of food gave me a context that helped me shift my mindset, and doing that was the key to making those food waste skills stick.”

How to Cook with Less Waste 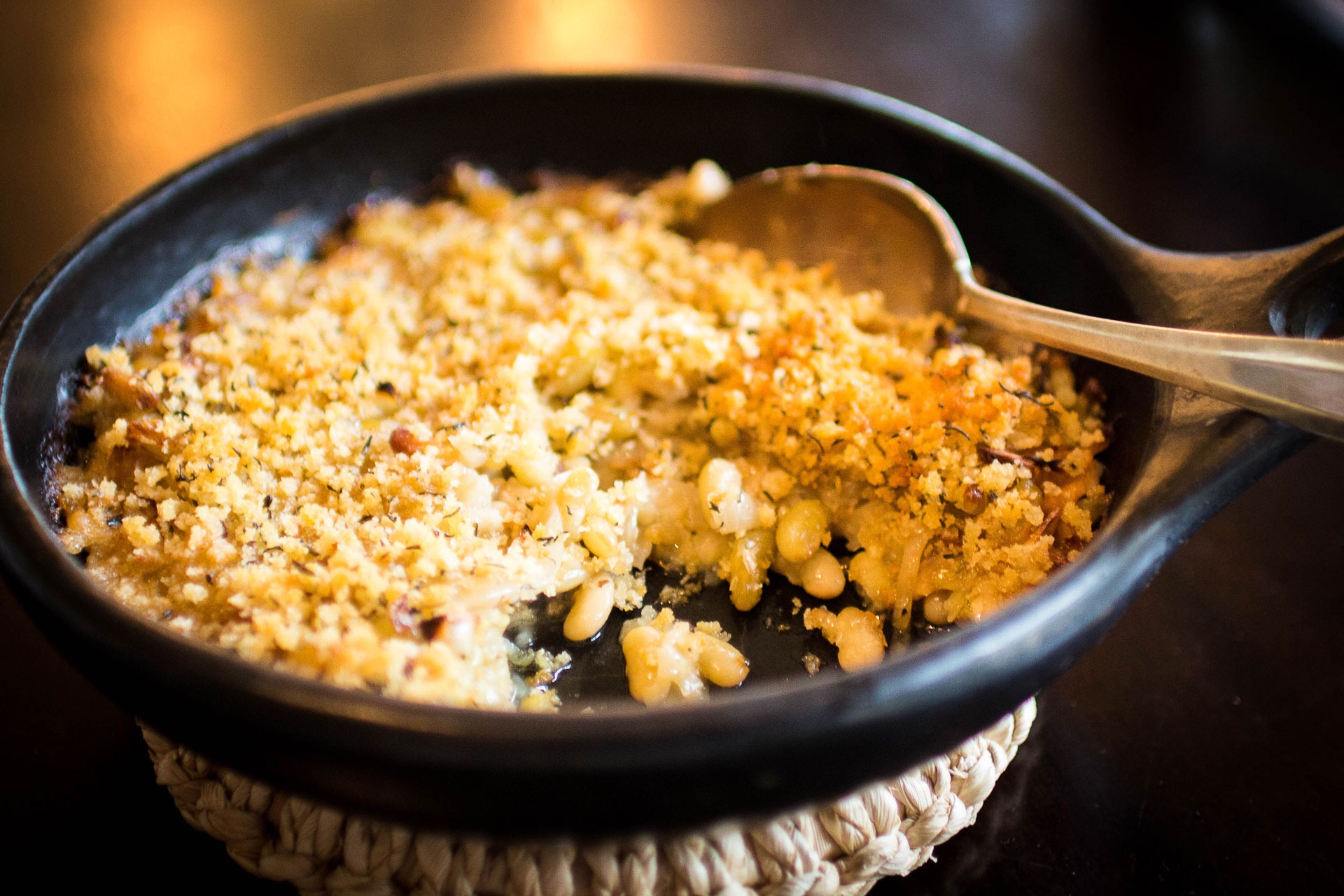 A shift in mindset is one of the easiest ways to reduce food waste on a personal level. If you realize you can pickle watermelon rinds, that watermelon you just bought suddenly looks twice as valuable. Once you learn you can eat beet greens or radish tops, the $5 you just spent on them stretches twice as far. FoodPrint has a wealth of resources that can help open your eyes to the parts of vegetables that normally go unused, including corn husks, radish greens, and scallion and leek leftovers.

Mealkit companies have claimed to reduce waste by providing home chefs with the exact amount of each ingredient needed for a recipe. Their ease of use makes them very tempting for the solo chef. But how eco-conscious are they really? Often, where there’s less food waste there’s still packaging waste, since all those bits of prepped vegetables, spices, sauces and proteins need boxes and wrapping. “Our wrappers, containers and inserts can all be recycled,” explains Maris Callahan, head of PR for the mealkit company Home Chef. “Even our small plastic bottles or jars can be repurposed, for example, for carrying salad dressing to work.” She pointed to a recent study showing that meals cooked from meal kits have a lower carbon footprint than comparable meals from grocery stores.

But even if you no longer have to worry about packaging, you’ll probably still come up against the numbers problem. Mealkits are geared towards couples or families, Callahan acknowledges, simply because it’s easier to deliver ingredients in larger amounts: “If we were to ship half a head of lettuce, it wouldn’t stay fresh.” For those who cook alone and want to try out mealkits, her advice is to order a mealkit for two, saving half the recipe for tomorrow’s lunch. In general, though, if you’re partial to mealkits for their convenience and concerned about the level of waste they generate, do your research and be vocal. More mealkit companies are beginning to react to customer desire for sustainability; it’s up to you to decide whether their standards meet your own.

Cookbooks that Remove the Stigma of Cooking for One

It’s one thing to cook for one if you’re used to buying spontaneously and cooking without recipes, but quite another if you treasure your cookbooks as a valuable roadmap for your every meal. That’s because most cookbooks offer recipes that are built for four to eight servings, so if you want to cook for one, you’ll need to do some serious math…or figure out what to do with a lot of leftovers. Books have cropped up in the past addressing the solo chef’s conundrum, most notably “Alone in the Kitchen with an Eggplant,” an anthology titled after a quote from beloved food writer Laurie Colwin. (“Certainly cooking for oneself reveals man at his weirdest. People lie when you ask them what they eat when they are alone.”) More recently is Anita Lo’s cookbook “Solo: A Modern Cookbook for a Party of One.”

The Michelin-starred chef found she was often cooking for herself, whether she was single or had a partner whose schedule didn’t match hers. Although Lo had been a professional chef for years, the extent to which supermarkets were geared towards cooking in bulk – not for singles – shocked her. “Most grocery stores have this — I’d like to call it a hegemony,” she said. “It’s kind of oppressive: everything is packaged for a family of four.”

Part of the impetus behind her book was to help readers realize just how easy recycling food scraps could be. Many recipes in “Solo” direct the reader to another recipe that will help them use up their leftovers. Sometimes, Lo has made clear, using up every scrap can be a creative and profoundly mindful endeavor, rather than a drag.

Speaking Up for the Solo Cook

Still, it’s important to realize that the only way supermarkets — or mealkit companies or cookbook writers — will start catering towards eco-conscious solo cooks is if those cooks become more vocal. Talk to your local supermarket managers about things like loose (unpackaged) produce or nuts, grains and spices sold by weight. It may happen slowly, but Lo acknowledges these are all crucial steps in removing the stigma of cooking and eating alone: “There is so much taboo around being alone,” says Lo, “and I try to make fun of that in the book. Everyone spends time by themselves, everyone needs to spend time by themselves, and I think we should celebrate the times we get to spend alone.”

Anita Lo, “Solo: A Modern Cookbook for a Party of One”

This recipe is a great way to use up old bread. Day old, week old, two weeks old — as long as it isn’t moldy, it will work. The lemon and olive oil soaks into the dry bread to make it soft and delicious again. And paired with the chicken breast, you have a balanced meal that covers all four food groups.

Mix broccoli with 2 tablespoons of the olive oil, then season with salt and pepper. Place on a baking sheet and put in the oven.

In the meantime, heat a sauté pan (preferably ovenproof) on high. Pat the chicken dry using a clean paper towel, then season with salt and pepper on both sides. Add 2 tablespoons of olive oil to the pan and, when smoking, add the chicken, skin side down. Leave on the heat for 30 seconds, then place the sauté pan with the chicken in the oven with the broccoli. (If you don’t have an ovenproof pan, just place the chicken in a separate roasting dish.)

Bake 5–6 minutes or until skin is browned, bubbly, and crisp, then turn. Turn the broccoli at this point as well. Bake another 6 minutes, until just cooked through. Remove both the broccoli and the chicken and set aside on a warm plate. The broccoli should be browned in places. Cut into bite-size pieces.

In a large bowl, mix the lemon juice and anchovy paste with the garlic and whisk in the remaining 3 tablespoons of olive oil. Add the red pepper flakes, basil, and red onions, then the bread cubes and broccoli, and toss. Taste and adjust seasoning as needed. Serve with grated Parmesan over the top alongside the chicken.

Excerpted from Solo: A Modern Cookbook for a Party of One by Anita Lo. Copyright © 2018 by Anita Lo. Excerpted by permission of Alfred A. Knopf, a division of Penguin Random House LLC. All rights reserved. No part of this excerpt may be reproduced or reprinted without permission in writing from the publisher.

How to Use Up Leftover Beans

The Best Veggie Burger for Anybody and Everybody