A few months ago, I conducted an extremely informal poll on my Instagram: “How do you feel about tinned fish?” I expected mostly polar reactions, but more than any of the other responses —  love it, hate it or indifferent — “tinned fish-curious, but unsure what to do with it” took the lead. For both our health and the health of the ocean, there are clear benefits to eating the small fish like sardines and mackerel that usually come in tins. What’s less clear is how to enjoy them.

I didn’t eat much fish growing up, and my only real exposure to tinned stuff was though my grandfather, who had a penchant for eating sardines straight from the can as a trailside snack on camping trips. He would always offer to share, but something about the smell of fishy oil drizzled over hot trail dirt made it a tough sell to a kid that mostly ate chicken nuggets. Years later, my relationship with sardines got a do-over.

It came on a 90-degree Boston day when the thought of turning on the stove in my un-air-conditioned kitchen made me want to jump in the Charles.  I’d heard that sardines — boneless, skinless and water-packed — could be a dead-ringer for a tuna salad. After one-too-many soggy childhood sandwiches, I wasn’t in the habit of eating tuna salad as an adult, but I decided to give it a try. I drained the can, noting the smell was less offensive than expected, then mixed the filets with some mayonnaise, pickles, capers, parsley and lemon juice. Spread between some fluffy bread, it was exactly what I needed: bright, fresh and acidic, but also briny, savory and filling. Maybe fish from a tin were worth a second chance.

Why You Should Think Small

NOAA estimates that Americans eat about 16 pounds of seafood every year, and 3.6 pounds of that comes from a can. Two-thirds of our collective canned seafood intake is tuna, with things like clam chowder and salmon making up another big chunk. Only a very small portion — just over .3 lbs — comes from small fish like sardines.

Think back to the food chain you learned about in elementary school: the sun feeds plankton, which feed tiny fish, which feed slightly larger fish, which eventually feed big fish like tuna. The catch is that only about ten percent of the energy in each level of the food chain gets transferred up, so that salmon or tuna on your plate had to eat a lot — about ten times its own weight — of smaller fish. This is pretty inefficient, and it means that there aren’t that many of those fish at the top of the food chain to begin with. Add poorly regulated fishing into the mix, and you get a serious danger of population collapse, just like the cod crisis in the 1990s.

The estimated pounds of seafood Americans eat per year, according to NOAA.

Farming fish might seem like a better alternative, but it runs into the same problem. Farmed fish still need nutrients like omega-3s that they can only get from eating smaller fish. As a result, millions of tons of small fish are caught and turned into fish feed. Thanks to a transition to soy-based feed (which comes with its own sustainability concerns), farmed fish eat fewer small fish than they used to, but it still takes more than a pound of smaller fish to farm a pound of salmon.

But what about eating these smaller fish directly? Even if you’re catching the same amount of fish, skipping the last link on the food chain means you’re making a much lower impact on the ocean. Small fish stocks are more resistant to overfishing than those of bigger fish: for starters, there’s a lot more of them, and they grow and reproduce quickly. This means their populations recover much faster than a slow-growing fish like a tuna. The fact that herring, sardines, and anchovies school closely together also mean that it’s easy to use fishing methods that are fuel-efficient and don’t scoop up a lot of bycatch. 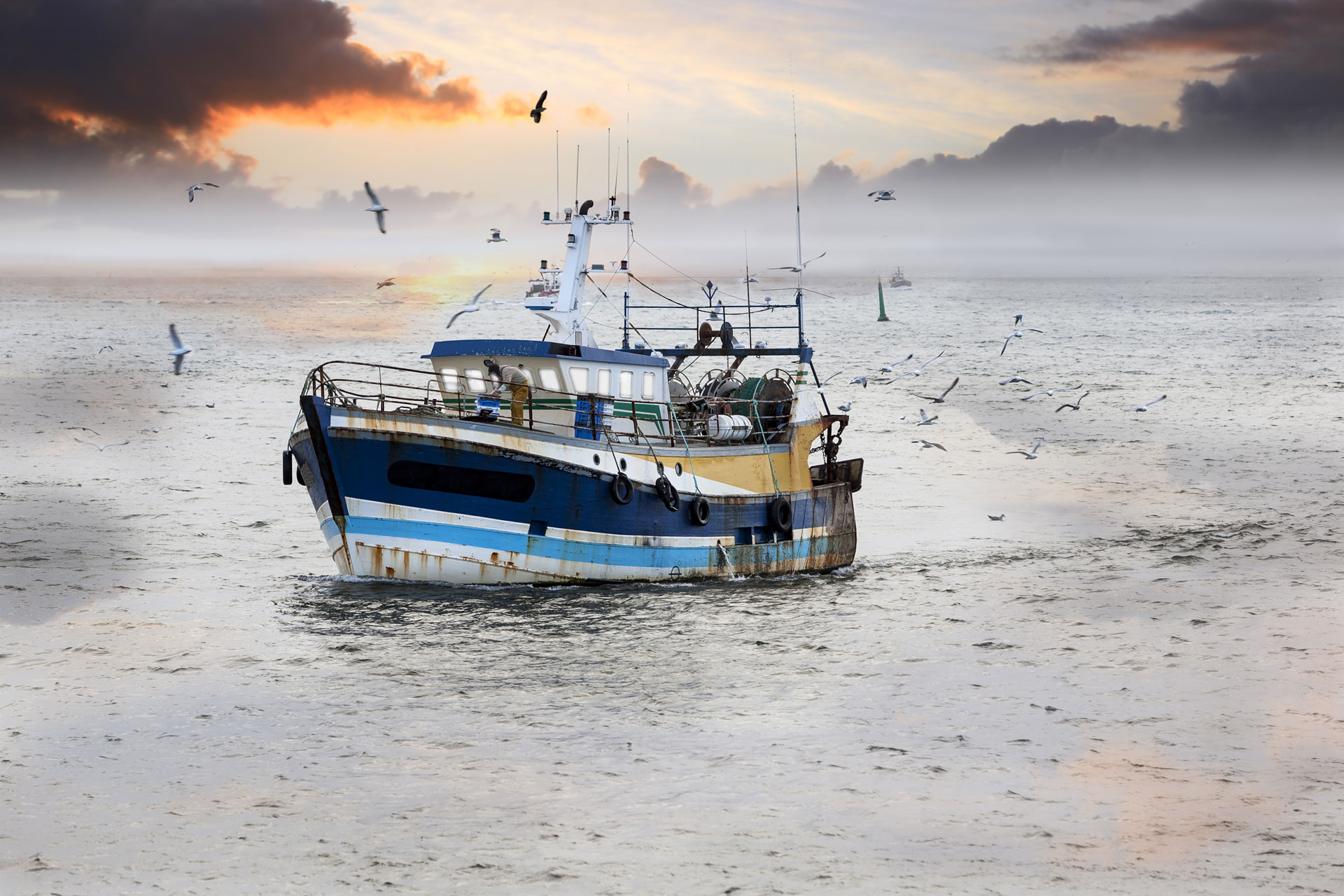 Finding Small Fish: What Labels Can Tell You

There’s no perfect grading or labeling system that incorporates all the environmental and social dimensions of sustainability, but you can be confident you’re making a better choice by sticking with small fish. If you’re still looking for more guidance, the widely-used Seafood Watch rankings from the Monterey Bay Aquarium are a stringent grading system you can trust; they don’t label products, but do provide searchable, up-to-date information on what fish and fishing methods are most sustainable.

For individual brands, many ecolabels and certifications are available, though all come with concerns about integrity in the face of profit. Of available third-party labeling operations, Marine Stewardship Council Certification (MSC, blue with a checkmark) is one of the more comprehensive: stocks have to be healthy, fishing methods must be low-impact and every fishery must clear an annual review. However, lack of certification doesn’t necessarily mean that a fish is unsustainable — certification is expensive, and not an option for all fishing communities.

Eating more small fish also makes sense from a health perspective: they’re a great source of protein and are loaded with healthy fats. Mackerel and herring have some of the highest levels of those omega-3s that cardiologists love, and sardines aren’t far behind.

Choosing smaller fish also means avoiding toxins that can be present in fish like tuna.  While energy dissipates as you move up the food chain, the opposite is true for contaminants like heavy metals and microplastics. Mercury, for example, “bioaccumulates,” or builds up inside organisms as they eat it. By the time a tuna has eaten ten times its weight in other fish, it’s also retained all that mercury. Anyone eating it absorbs it themselves. Reaching for that tin of sardines or mackerel means that you’re dramatically reducing your mercury intake while still getting your recommended two servings of fatty fish a week.

How to Prepare Tinned Fish

If you’re lucky to live near a coast, you can find a wide variety of fish — big and small — at the market. But putting fish in a tin offers a few distinct advantages. They’re processed and preserved at their peak in terms of both flavor and nutrition. This offers consistency wherever you live — they’re just as good in Arkansas as they are in California.  While fresh fish are subject to seasonal changes in supply, you can enjoy tinned fish regardless of the season. Their long shelf life also makes them helpful in the kitchen; keeping a few tins of something you like in the pantry makes throwing together a last-minute meal easy.

A few rules of thumb:

Because anchovies pack a lot of flavor in a small amount of meat, they have different uses from other small fish. Despite their reputation for pungency, anchovies are a surprisingly easy entry point into enjoying preserved fish. You might be unknowingly eating them already, since they’re widely used as a subtle, savory base for dishes that aren’t obviously fish-forward, like classic Caesar dressing. When warmed in oil, anchovies “melt” away and give a rich, salty layer of flavor that comes across as more meaty than fishy, like they do in this Caramelized Shallot Pasta.

If you’re ready for something more concentrated, anchovies are great as a topping for pizzas, toasts, and salads — anywhere they round out an acidic sauce or dressing. Any time you’ll be eating whole fillets, the quality of the anchovies matters; a few extra dollars can guarantee there won’t be any off flavors or overwhelming saltiness. Rinsing the fillets gently in water also helps take the bite out of the brine.

Sardines, mackerel, and herring all have slightly different tastes. Sardines and herring are more assertive, while mackerel is milder and buttery, but they can all be used in similar ways. They come in many forms: whole or filleted, with or without skins, plain, smoked, in flavored oils or sauces.

Both whole fish and fillets, especially those with flavoring, are a favorite on toast with some tomato, lemon and herbs. If you buy it skin-on, try crisping the fish on both sides in a very hot pan — since it’s already cooked, this only takes a minute, but it goes a long way in removing any “canned” taste and gives it a delicious, crackly exterior. Unless the fish are very large, you don’t need to remove any of the bones – the canning process makes them soft enough that they’re barely noticeable, plus they’re a great source of calcium.

If bones are a conceptual hurdle for you, it’s easy to find boneless and skinless fillets. You’ll miss out on some of the calcium, but boneless fish work well in cold salads, where they add substance but still feel lighter than other proteins. Of course, you can also mix them with some mayonnaise and whatever fresh, acidic ingredients you like for a variant on the tuna salad-style sandwich. Or, for a nominally upscale experience, try smoked fillets as a pate or rillette on chips or crackers.

Fillets are also easy to add to pastas, curries and sauces, provided you add them towards the end of cooking and heat them gently, otherwise they’ll fall apart. Folding them into a hot dish after cooking is usually more than enough to heat them through.