“Supermarkets are where the average consumer encounters the most throwaway plastics,” says John Hocevar, marine biologist and oceans campaign director for Greenpeace USA.

In the US, food containers and packaging generate more than 82 million tons of waste each year and the single-use plastic packaging in supermarkets ranks as the largest contributor to plastic waste — and supermarkets are failing when it comes to tackling the problem.

The recently released 2021 Supermarket Plastics Ranking report from Greenpeace USA ranked 20 supermarkets based on their efforts to address plastic pollution and all received failing grades.

Giant Eagle, the highest ranked supermarket in the new report with a score of 38.8 out of 100, committed to eliminating all single-use plastics in its stores by 2025; Kroger announced a goal for all of its store brand packaging to be 100 percent recyclable, compostable or reusable; ALDI set a similar goal and committed to a 15 percent reduction in the packaging of its store products by 2025.

Greenpeace UK reported that half of supermarkets had no specific targets to reduce plastic waste and those that did had such modest goals that it would take decades for single-use plastics to disappear from store shelves.

“The future is in reuse and it needs to be a big part of how grocery retailers do business,” Hocevar says. “Plastic [reduction] is still a low priority for retailers [and] these companies still have a long way to go to reach their goals.”

The COVID-19 pandemic has made the problem worse.

Thanks to an uptick in takeout and home deliveries and bans on reusable coffee cups and reusable bags, plastic waste increased 30 percent in 2020. Bulk bins were off limits, too, with grocers like Stop and Shop, Tops and Whole Foods closing or limiting bulk offerings and banning refillable containers.

The Plastics Industry Association promoted single-use plastic products as “the most sanitary choice” and the U.S. Centers for Disease Control and Prevention issued draft recommendations encouraging restaurants to prioritize disposable items to minimize virus exposure. Grocers pointed to those claims as evidence that supported the return to single-use plastics.

In a Greenpeace USA statement released last June, a group of virologists, epidemiologists and health experts agreed that the risk of transmitting COVID-19 via surface contact was slim and reusables were safe and should be encouraged.

Although some cities have reversed their pandemic-inspired plastic bag bans and allowed stores to reopen their bulk bins, the problem of single-use plastic waste persists.

A Love of Convenience and Recycling’s False Promise

“Our consumerism drives demand in plastics,” explains Rachel A. Meidl, LP.D., CHMM, a fellow in energy and environment at the Baker Institute for Public Policy. “The widespread use of plastics is driven by our desire for convenient, portable, lightweight products…that results in low quality mixed polymers that are impossible to recycle within our current systems.”

Indeed, U.S. Environmental Protection Agency data shows that just 8.7 percent of plastics are recycled, in part because of a lack of facilities. Consumers who are committed to recycling might be duped into choosing single-use plastics. In 2020, Greenpeace USA filed a lawsuit against Walmart, claiming that the retail giant was labeling single-use plastics as recyclable despite a lack of access to facilities to separate them from the waste stream for recycling. 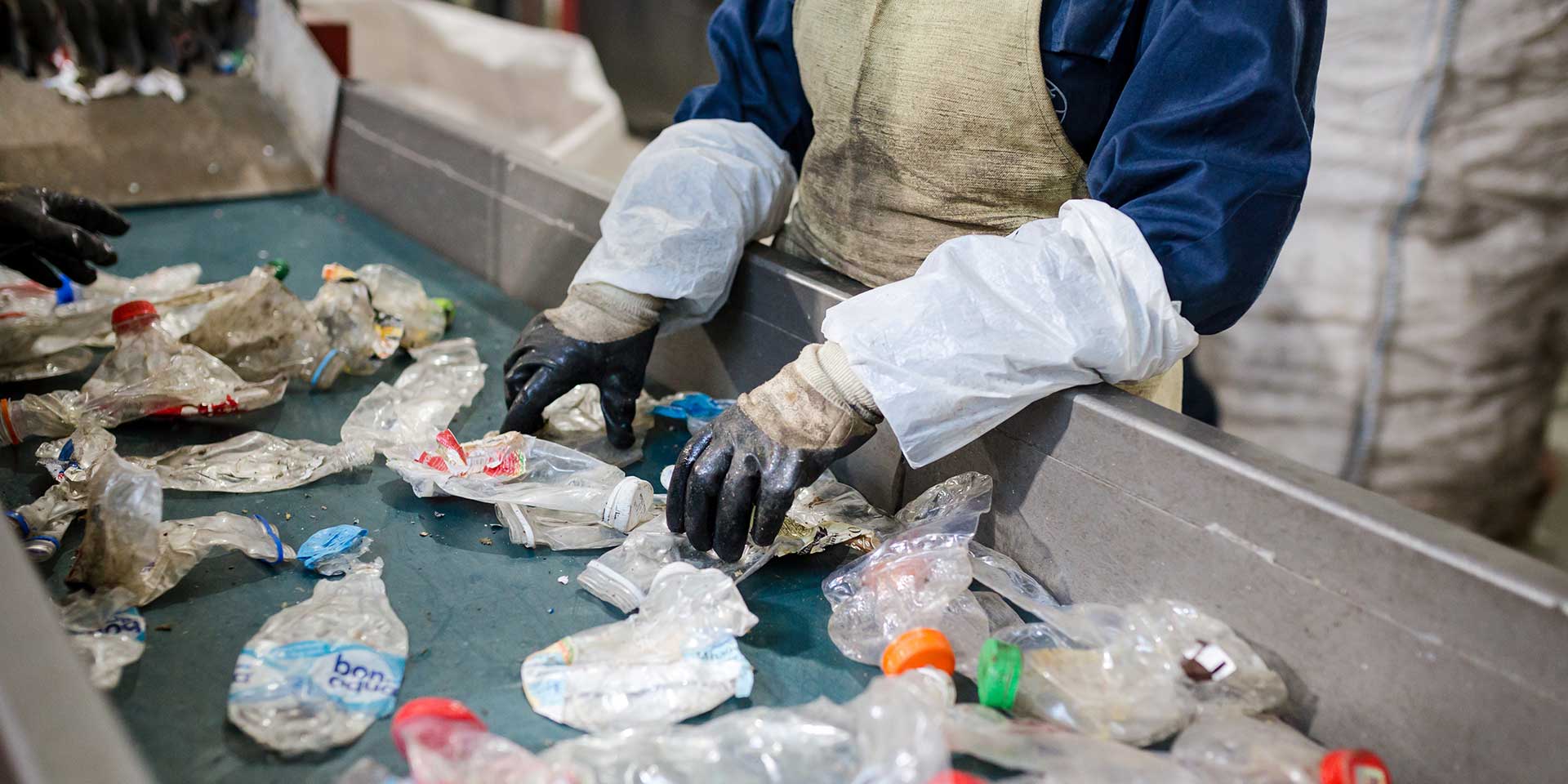 “If plastic packaging that is not recyclable is haphazardly tossed into the recycle bin, it contaminates higher quality polymers that are recyclable and, due to cost of segregation and sorting, the entire bin will likely be routed to landfill or incinerator,” Meidl says.

Or, it gets shipped overseas. The US exports more than 2.5 billion pounds of plastic waste to poor nations like Vietnam, Indonesia and Thailand (after China refused to accept more discarded plastics). In 2019, 189 countries agreed to limit the amount of plastic waste shipped overseas as part of the Basel Convention. The latest data shows that overall scrap exports remain unchanged.

Manufacturers are exploring alternative packaging options but an obvious replacement for single-use plastics has not emerged — yet.

“There are a lot of obstacles,” admits Yael Vodovotz Ph.D, professor of food science and technology at The Ohio State University.

“It’s not going to happen overnight; we need to look at incremental changes,” Vodovotz adds. “If we take a plastic that takes 400 years to degrade and get it [to degrade] in five years, we’re doing a great job.”

Zeroing in on Sustainable Solutions

Zero waste grocery stores have emerged as one option. The stores stock products ranging from coffee and cereal to flour and olive oil in clear self-service containers that are dispensed into reusable containers; the goods are weighed at the checkout.

“Grocers need to build up reuse and refill offerings and offer more package-free options,” Hocevar adds. “There are a lot of good options out there…and retailers, once they take responsibility for what they sell, can have an enormous influence.”

The website Litterless maintains a database of markets in the US are zero waste or that offer some refillable options like bulk bins, but the options are extremely limited. There are just nine grocers in Denver, eight in Portland, Oregon and Minneapolis. Loop is one of the few national options: The zero waste grocery delivery service stocks brands like Haagen-Dazs, Nature’s Path, Tropicana, Crest and Clorox. Items are packaged in reusable containers; when the containers are empty, the packaging is returned via a postage-paid reusable tote. Currently, the online retailer stocks 100 items and most are toiletries.

Although the number of zero waste options are growing, it’s still not a mainstream concept —and Meidl warns that it might solve one problem but create another.

“Reusable containers have clear benefits: It avoids the environmental costs of manufacturing and disposing of single-use plastic packaging and reduces littering…but the materials that replace single-use plastics also have life cycle impacts,” she says. “Glass and metal products are heavier, thus requiring more fuel to transport and both are emissions and resource-intensive to manufacture and cotton scores poorly for waste generation and high energy, water and land use; these products have to be used thousands and thousands of times to even gain the environmental benefit.”

In its Roadmap to 2030 report, ReFED, a national nonprofit working to eliminate food waste, noted that grocers connect all points along the supply chain from manufacturers to consumers and can exert that influence to drive change but cannot address single-use plastic waste alone.

“The onus does not solely rest on any one industry,” says Meidl. “Every party along the value chain has a responsibility.”

Meidl would like to see supermarkets partner with the downstream recycling industry to establish collection sites for post-consumer plastic bags and product wraps that can be recycled. Grocers could also work with plastic producers, brands and waste management companies to phase out packaging.

“The government has to hold retailers and manufacturers accountable for their plastic waste.”

“The government has to hold retailers and manufacturers accountable for their plastic waste,” adds Hocevar. “[With the new administration] it’s easier to imagine meaningful action coming out of Congress.”

In the meantime, supermarkets have enormous power to address waste from single-use plastics and Hocevar points to a Greenpeace UK report, Unpacked, which offers a roadmap for grocers looking to cut plastic waste that includes removing “pointless packaging” like apples sold in clamshell containers, adding refill stations for beverages like soda and milk and adding more bulk bins and package-free groceries. He also hopes that calling out their efforts through vehicles like the Supermarket Plastics Ranking could move the needle.

“The retail sector is competitive and customers will use these tools to decide where to shop,” he says. “Retailers often default to the excuse, ‘We’re giving customers what they want,’ but a lot of us want better than what we’re being offered.”

“Companies acknowledged the problem and made quick progress; the whole sector came a long way in 10 years,” Hocevar adds. “Plastic is a lot less complicated than seafood…and the culture can change quickly if there is a commitment to tackling the problem.”